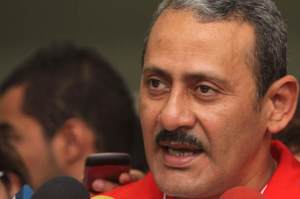 (Former CC intern Rachelle Krygier is back, and is reporting from Caracas.)

Venezuelans go to bed not knowing if in the morning they will be able to find, let alone afford, basic staples. Providing for leisure activities for themselves or their families is so far beyond the pale, many have stopped thinking about it.

And what is the government doing about this? Basically, making fun of us all. Rather than appeasing the crisis, intensifies it.

Pablo Baraybar, president of the Venezuelan Chamber of the Food Industry (CAVIDEA), alerted the country on Monday about an order sent to private food companies by the National Superintendence of Agriculture and Food (SUNAGRO), to redirect from 30 to 100% of basic goods like milk, pasta, oil, rice, sugar and precooked corn flour to public food suppliers like Bicentenario,  PDVAL, and Mercal.

In a press conference, Barayar explained the severe consequences that such a move would entail.

Three out of four times, Venezuelans go to private suppliers near their homes or where they find shorter lines. Redirecting products from 113 thousand private retail outlets to only 7400 public retail outlets would concentrate essential goods in 15 times fewer supermarkets.

Private suppliers would not be able to provide goods, meaning Venezuelans would have to travel longer distances to find what they need, and they would have to spend more time in longer lines.

Roberto Leon Parili, President of the Alliance of National Users and Consumers (ANAUCO), said public food suppliers are not structurally capable of providing for the needs of the 92 thousand people that CAVIDEA estimates would shop in each public food supplier.

The bachaqueros, those who stand in line and buy products to sell for higher prices to those who have no time to engage in the adventure, would earn even more money, as Venezuelans would be less willing to stand in longer queues and would be more desperate to find goods.

The government has tried to control bachaqueo by establishing limits on what each person can buy, through their ID numbers or through fingerprint verification machines. SUNAGRO’s measure would revert any minimal benefit from this, and would increase the profitability of this informal job that fuels inflation, speculation and scarcity.

Private food suppliers would go bankrupt. Thousands of workers along with truck and supermarket owners would lose their jobs.

Inflation and scarcity aren’t just numbers that represent the cracking Venezuelan economy. They are factors that affect Venezuelans’ daily lives in many levels, no matter their economic standing. They are the measures of a deeply personal tragedy.

Inflation and scarcity determine the way Venezuelans spend their money, the amount they can save, and the quality of the products and services that they buy. It also impacts the way they spend their time, taking hours from their productive day to spend in lines and searching for basic products in various supermarkets.

The paring of soaring inflation with the high levels of scarcity is an on-point recipe for daily fatigue and frustration. Venezuelans’ daily conversations consist of, What do you bring in those bags?, Where did you find it?, Have you seen how much an apple costs? Its ridiculous!, I can’t afford my kid’s school shoes.

Products that should be national icons, such as coffee and corn flour, have become a luxury. Basic goods like tampons, condoms and shampoo are what people who can afford to travel bring back home.

With the government’s move, the solution to scarcity and inflation becomes a distant dream.

To grasp the impact of such an irrational initiative, one needs to understand how miserable the daily life of a Venezuelan already is.

Although the official inflation number hasn’t been updated since 2014 (68.5%), the increase of the cost of basic goods is there for everyone to see. No matter how much the government tries to hide it, the effect of disorganized spending and arbitrary measures is evidenced in the lives of every individual being in the country.

According to the Center of Documentation of Social Analisis of the Venezuelan Federation of Teachers, (Cendas-FVM) people need eight minimum wages to pay for the basket of basic needs, which is a calculation of the cost of food, services, clothing, health, housing and hygiene for a family of five people. Eight minimum wages for five people.

According to their calculations, the cost of living has increased 163%, or five minimum wages compared to last year.

Most of it happened in only one month, from May to June, when the cost of basically everything increased in unimaginable amounts. In a month, the cost of the basket of basic needs increased by 26.5%, more than a whole minimum wage, according to CENDAS-FVM.

Clothing increased by 48.3%. Food increased by 29.7%. Hygene products by 5.8%, health products by 4.9%, housing by 1.5%. The cost of education, which is not included in the basket, increased by 29.1%. Thirteen minimum wages are needed to afford the list of uniforms and materials for pre school and high school.

Venezuelans are stressed out by dealing not only with an increase in the cost of living but also with not being able to find vital goods without spending hours (5 per week according to Datanalisis) in queues with no guarantees.

Twenty basic products and at least 49 additional ones are scarce nationwide according to CENDAS-FVM. According to Datanalisis the scarcity number in Caracas is 65%.

Leon Parili said it is not about social classes any more, because every Venezuelan wants to eat arepas and rice, and every Venezuelan needs to be able to choose where and what to buy. ¨They have sold us the idea that the populace is the sovereign, so how come they take from us the right to choose?¨ he said in a press release on Tuesday.

Baraybar said that the solution, which is CAVIDEA’s proposal, is to produce more rather than redistribute the existing products.

“The products that we have are not enough. What we need is to produce more. Eight billion dollars were assigned to the Vicepresidencia Agroalimentaria to resolve the scarcity problem. What we ask is that they give us 18 percent of that, to be able to pay the debt to our foreign providers and reactivate our production lines. If so, we would immediately be able to produce 32% more. And we ask that the state, which produces 40% of the national food supply, produces to its 100% maximum. That is the only way to satisfy demand inside the country,” he said.

The Minister of Food, Carlos Osorio, accused CAVIDEA of publicizing false orders in an interview with Diario 2001. He said that what they are looking for is to balance the distribution of food, and that they are not trying to favor any public food supplier.

If SUNAGRO´s measure only exacerbates the crisis, then why is the government doing this? Don´t they need to appease people by relieving them from economic stress before legislative elections in December the 6th?

One week ago Henrique Capriles Radonski predicted the electoral move in a press release. He said “a politically motivated formal control in the distribution of goods is coming.”

Through the move, the government intends to prove that the economic war theory is true. They want to show that products can only be found in public entities, and that despite queues, they are there, in “fair” low prices – unlike the ones in private supermarkets where private owners and producers allegedly are conducting a war against the government and the people, by producing less food and selling it at unrealistically high rates.

Because, ultimately, it’s not the products they care about. It’s the narrative.

UPDATE: SUNAGRO backed down this morning. Through a message on its website it affirms that the measure is no longer valid. Apparently they heard CAVIDEA’s warning and formally reverted the order that minister Carlos Osorio had said was false.

31 thoughts on “A silly response to a serious crisis (UPDATED)”