(A few weeks ago, I got an e-mail from a Venezuelan currently studying journalism in New York City, and yadda-yadda-yadda, Caracas Chronicles has a summer intern!

Meet Rachelle Krygier. I am looking forward to hearing what she has to say. She’ll be blogging from Caracas for the next few months.)

A man brings up his curtain of the plane’s window. He turns to his wife, “it’s beautiful, gorda, look.” The sound of his nostalgic voice wakes me up after sleeping for one of the four hours of flight from New York to Caracas. 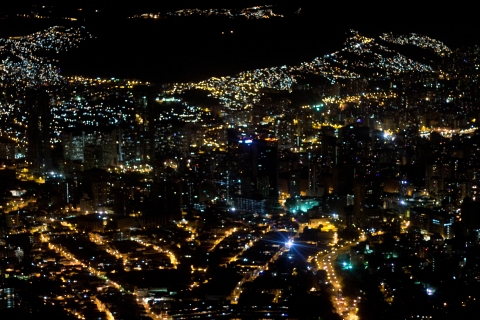 With his thick Venezuelan accent, the man probably knew that those lights on the mountains weren’t produced by planned illumination, as if they were monuments in Parisian nights or the Empire State Building in New York evenings. He probably knew those lights come from millions of zinc-roofed houses piled up one besides or on top the other. I bring up my curtain and agree silently. It is beautiful, it is home.

Still unable to shake the daze, I run to get first to the immigration line that is usually hours long. Hola corazón, says the friendly officer while he opens my passport.

How are you? I smile and take my jacket off.

Politics and Journalism, I say. And he laughs.

Are you coming back to Venezuela?

I pull my hair into a pony tail and notice a big poster of Chavez and Maduro that reads “La lucha sigue”. I have two more years left of studying, I answer and wonder if he really thinks I know what I’m going to do afterwards given the country’s instability.

Oh that’ll go by fast. Good luck mi amor. And he hands me my passport.

But do I want it to go by fast? What am I going to do if I graduate and I don’t want to come back? Is there a chance that that will happen?

Well yes, if there’s no future for me here, it will, I think to myself. That’s what my cohort is protesting in the streets for: the right for a future. A future in a place where I don’t have to wait for luggage nervously, thinking of how dangerous it is that my dad is waiting for me outside at night.

I look around. I’m surrounded by people who call me names I haven’t been called in a while. I drown out my nerves with the taste of arepas and pabellón I hope to have soon.

After getting my bags, I smile to the guy who helps me put my luggage through the final security, hoping to decrease the chances that he’ll order my bags to be checked. That would make my dad have to wait longer.

Someone once told me you could tell which Venezuelans had been living abroad by how much they smile at strangers. Strangers here have stopped smiling as much.

I try to call my dad, but it’s useless. And then it happens, they have to check my bags.

I do not complain, more nervous smiles. Ven chica, says a woman wearing a red chemise. She opens my bag and I look at her face- she’s angry. Sorry for that, I say, trying to be funny (that smile again) when she tries to find something illegal- or undeclared- in between a lot of mess. She looks at me menacingly. Screw you, I think, while I call my dad again. You should put that phone away, she says. I hang up and stare at her. I say thank you, good luck.  I exit the airport followed by many guys wanting to carry my luggage for tip.

My dad and I walk to the car- or more like jog since he pushes me to move faster. I lock myself in while he puts the luggage in the trunk. And we’re finally on the way back home; a path I look forward to every time, on the very moment I take off from Caracas back to New York. Anxiety levels begin their descent to normal. For many of us, home means adrenaline.

I turn on the air conditioner and look out into the mountains. I think about that woman in the red shirt. Where did she live?  How did she feel looking through other people’s belongings? Why was she mad? How does her story narrate our country’s?

My dad asks questions about school, and about New York. He notices I’m absent and I notice he turns his head to look at me . So I say New York’s great.  I don’t want to ask about Caracas, so I hold that inevitable question for a while.

I turn my thoughts to how everything has probably changed more than I can imagine. I start by thinking on the country as a whole, on the scarcity everyone talks about, crime, the protests, the guarimbas, repression. I think of the students my age that have been in the streets while I was worried about term papers.

And my thoughts get smaller and smaller in scope.  I get to Caracas, to communities, to families and then to moms and dads in the infinite contexts that constitute my city’s population.. I get to my own friends, my family and to how their lives have changed as a consequence of political chaos.

I want to tell their story, I think. The story of the family living in Petare, the story of the teacher lecturing in a fancy private school, but living in Catia. The story of the owner of a formerly weel-known bookstore, of the woman whose house was provided for by the government, of the man who asked what I was studying, of the woman in a red chemise  at the airport, of the guys who wanted tip for carrying my bags, of the high school students that drew the graffiti my eyes were fixed on while stopped by traffic. I linger on that thought for a while until I burst: I’ll have stuff to write about.

Oh you shouldn’t be worried about that, my dad says to make me realize I said it out loud.

I’m overwhelmed and I change the song and how’s Caracas I ask. I’m not surprised with my dad’s unsettling Bueno… tu sabes como es.

So when do you start writing in caracaschronicles? Did you talk to Juan Nagel? And I tell him I did and that I would start soon, and that the idea was that I would write about people and places. What people and what places, he asks.

Places in the city that I love and don’t love, know and don’t know- to show readers more than what they can find in the International Media. My answer is probably way too vague to produce in him any sort of reaction. Either that or he’s worried I’ll venture into some danger zone (what part of the city isn’t). You’ll show me what you mean when I read your drafts, he says after I give him the SO? look.

And people, well, all sort of people that through their story can tell a whole lot about the big picture. I’ll try to provide readers with what I’m craving when I’m not here, a taste of home. And for those who live here, a bittersweet taste of their own reality.

Dad smiles approvingly. It’s great that you just sent him that email. It’ll be a great experience.

I feel excited but scared. I know right? I take my phone out to call my family and hear their pleasant Bienvenida Rach!- music to my ears: I’m home.

44 thoughts on “The Way Back Home”