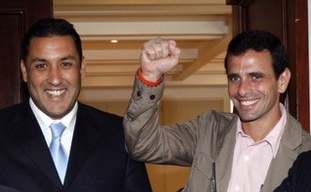 Half the fun of primaries is the license they grant you to speculate wildly, so don’t mind if I do: I think the opposition primary will turn into a two-horse race between Henrique Capriles Radonski and Pablo Pérez.

And here’s why: barring the unlikely, Leopoldo López is not going to be allowed to stand, whatever IACHR rules. In his absence, Neo-copeyanismo is going to tend to rally around Capriles: a process that’s already well underway. There’s still a chance of Capriles deflating following a scandal and/or huge gaffe. And, to be sure, he could always be disqualified from running himself. If that happens, MCM will struggle to stifle a smile. But the likelihood is that Capriles is the guy that the Christian Democratic family is going to rally around.

When that happens, a blocking coalition from Neo-adequismo is bound to arise, and they will soon realize they can’t let their votes get split up too many ways or else they’ll be handing the thing to Capriles. Who will they rally around? Well, Rosales is a horrible campaigner who doesn’t even live in Venezuela; his only conceivable role is as spoiler to his one-time protegé. Ledezma could still manage it: he’s savvy behind the scenes and doesn’t poll horribly. But chances are the Social Democratic family is going to want to rally around a youngish, telegenic figure who focus groups well with independents. If they know what’s good for them, they’re going to end up supporting Pablo Pérez.

So I’m going to go out on a limb here and say that by Christmas time, 80%+ of likely primary voters will be telling pollsters they’re going for one of these two. That’ll create huge pressure on the others to drop out. The smart ones will do so early enough to put in a valuable endorsement as they try to jack up their chances of landing a plum cabinet job come 2013. The rest will be increasingly irrelevant.

And hey, turns out I’m not the only one who thinks it will pan out this way.

So go ahead, come back in six months and laugh at how wrong we had it!