Caught the red eye to Barcelona. Barcelona, Anzoátegui, that is.

Blood-shot eyes. Mosquitoes big as helicopters, and the wait. That absurd time-bending wait while an immigration officer chats on her phone, one kid cries, the other drools over your shoulder, and you are about to lose your connecting flight. As the immigation officer giggled, a cat nibbled at my shoes. I kicked the damned thing, and the lady focused on her task again. As if they were connected somehow. I’m no cat person. Sorry Cecil.

My wife found some very cheap tickets to fly Avior —I bet many horror stories begin with this same sentence— and spend some days visiting the family back in Caracas. Like many young Venezuelan families we decided to emigrate a little over a year ago and blabla-ávila-blabla-arepa-blabla-ladilla. [This won´t be one of those Venezuelan-self-loathing posts, nor one of those sappy Venezuelan-self-pitty-Cruz-Diez-floor posts. Promise. We’ve lived abroad before. We like to jump around. Maybe we’ll be back in Caracas again. Who knows? Also, I´m not gonna bore you with details of how much Venezuela has changed since February, which was the last time I was here. It’s pointless. The country changes noticeably from day to day for the people that live here.]

I had been at the Barcelona airport before, and remembered that it had a face-lift a few years ago. A little botox here and there and a whole bunch of publicity promising a full-on reconstructive surgery, implants, the works. The posters are still there, but now yellowy and shredded.

Venezuelans are used to chaos, but this was on another level: No one really knew where they were supposed to stand, sit, pee, or run to when their planes were called. The walkways don’t connect to the planes and all the floors look like Greek ruins. And ruins are no tourist attraction on a relatively new building.

Monday morning caught me having to spend hours doing the same as every time I come back to Venezuela: Setting up my cellphone for the nth time. For some reason, while in the country, all the services associated to my credit card work perfectly. But as soon as I cross that dreadful yellow line at the Miami airport everything goes to hell. So I was once again at the Movistar office and I found —there too— a very long queue of people waiting to get tickets from a computer which only gave you two options: Client Support or Equipment and Accessory Purchase. This time, apart from reconnecting my old line, I needed a new SIM card so I pressed the first option. Half an hour later I was called.

I forced my best smile, and explained to the clerk what I needed. She told me to wait. And as she was typing something on her computer, I saw an old woman come up to the booth next to me. She asked for a new SIM card, and the girl at the other side of the desk told her: “you need another ticket, I can’t process your request with the Equipment and Accessory Purchase ticket. Sorry.” The lady protested, I protested, other clients on the line protested. But the final answer was: No. The woman went back to the line to get a new ticket that said she had 30 people before her.

My clerk turned back to me and said “sorry, it appears that your line is disconnected and I can’t process the SIM card request if you don’t [bureaucratic queue]. I uttered my disappointment as politely as I could. And as I was turning away she said “hold on.” The whole Movistar system was on and off. But she made a quick call, scribbled something for 5 more minutes on her computer. And my problem was solved.

As I stepped outside the Movistar office and started walking back to Chacao, I felt home again. I took in the air, and realized -indeed- that nothing much had changed in the old neighborhood except for the building that used to be the Ministry of Tourism and now looks like Cheverito’s —that cartoon character the government created to fight the war on tourism— secret lair. I flicked that disruptive piece of visual diarrhea, and kept on walking, thinking about those two clerk ladies, and how perhaps both really must be angry about their ever dissolving wages, and how the one that helped me was just naturally competent and nice, and how she deserved way better than being stuck there, and how maybe this woman isn’t alone and perhaps there ‘s a whole sleeper army of competent people Easteregged all over the bureaucratic behemoth just waiting to step forward with a change of the tide.

I got home with my little yingydiyangydi zen story of hope, and my wife tells me John Pate was killed during the night. He was stabbed to death while at home. At home. Just take in what that last word means for a second. Warmth. Lazy Saturdays. Safety.

I met John once. A well mannered, kind man, with a great reputation as a top international lawyer who had fallen in love with Venezuela many years ago. And who was willing to stick around.

At the cost of breaking my promise: After I came to my senses, I thought of the Cruz Diez floor at Maiquetia (damn it!). That fracking floor is the last thing you see when leaving the country. It leaves you with a vintage taste of the modernist, developing country that Venezuela once was, and that feeling stays with you until the day you return. It is, indeed, a beautiful work of art.

And then, I realized that the first thing I saw as we stepped off the plane in Barcelona, which is pretty much the same thing you’d see when arriving to Maiquetia airport, are Chávez’s eyes. 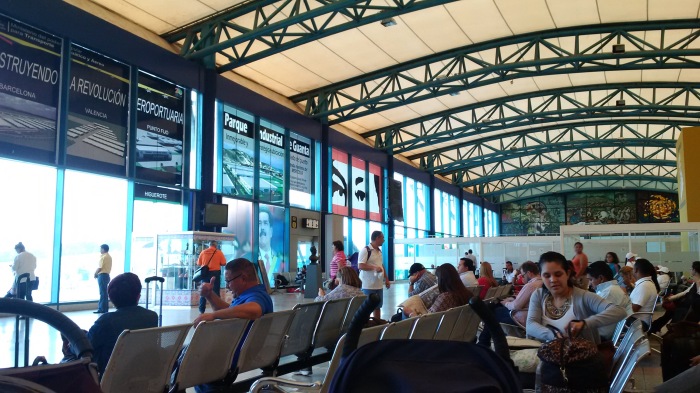 Those voodoo, vigilant (voyeuristic?) eyes staring right back at you. Hiding behind something. Watching the ruins from a safe place. Always there. As if reminding you that in this land there is no break from chaos. No breathing. The grind never stops. And maybe, maybe that’s just how the Comandante would’ve wanted it.

Caught the red-eye to Barcelona, and the Red Eye caught me. Still, it´s not cliché, that which is killing us.

38 thoughts on “Another Return to Caracas Chronicle”