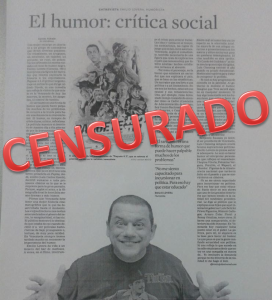 One full year after El Universal, one of Venezuela’s oldest and largest newspapers, was bought by HegemonCorp., its opinion pages have been purged, journalists have been fired, its main cartoonist Rayma was unceremoniously dumped and its new editorial line has become insipid.

HegemonCorp.’s alleged 120 million dollars takeover has paid off, even at the cost of the paper’s reputation and of the promises made by incoming chairman Jesus Abreu Anselmi just days after assuming his post.

In recent days, El Universal continued its censorious ways by dropping a couple of articles: One, an interview with Venezuelan comedian Emilio Lovera and the other, an opinion piece about the state of LGBT rights in the country.

What did they have in common? Indirect criticism of the government.

First up, El Universal was supposed to run an interview by journalist Daniel Fermin with Emilio Lovera, who’s promoting his latest movie “Paquete #3”, on its June 19th edition. When talking about the situation facing comedians in Venezuela and the absence of outlets for local comedy on television, Lovera said:

There are hardly any comedy shows on TV. Humor bothers the government. I imagine that TVes will make one at any moment. What’s really regrettable is that many comedians support the government’s line. Mass media are quite reduced for us. The Internet is the only thing left, which isn’t an economically viable media to get by on. Places administered by the State are closed to us. They tell us we’re not banned, only that they’re booked until 2070. At least, we have invitations to go abroad.”

El Universal’s official excuse was “lack of space” and it eventually published the entire interview the following Sunday. The National Press Workers’ Union (SNTP) questioned the paper’s reasons and are keeping an watchful eye on them.

For Lovera, things have not been so easy in recent years: He was part of the well-known show “Radio Rochela“, which ran on RCTV until the channel was shut down by the government twice (from open-air in 2007 and from cable and satellite TV in 2010). Then in 2011, he went to private channel Televen to make its own show “Mision Emilio” for three years until it was canceled in early 2014. Some press reports say that the program was a collateral damage of Televen’s licence renewal by Venezuelan broadcast authority CONATEL, something strongly denied by the hegemony.

This year, three performances of his latest act with fellow comedian Laureano Marquez were canceled after the tax authority SENIAT closed down the theaters where the duo was supposed to perform in three different cities. But that’s part of Chavismo’s war on comedy. The hegemony’s version of funny programs are more ideology than actual laughs.

Moving on to the second censored article, which was dropped from this Monday’s EU edition: Titled “Free and Equal” (Libres e Iguales), the opinion piece by human rights activist Rafael Garrido (member of NGO Red de Apoyo por la Justicia y la Paz) mentions that the Bolivarian Republic doesn’t upheld the Constitution’s Article 21 (which bans all kinds of discrimination) when it comes to the country’s LGBT community.

The column was written in the wake of two events: last week’s landmark decision by the U.S. Supreme Court which recognizes same-sex marriages and recent words from Diosdado Cabello who pledged during a TV interview to pass new LGBT-related legislation in the National Assembly, after saying that “he didn’t have any problem supporting it”.

But El Universal told both Garrido and the NGO (which has a weekly column on the paper) that this particluar article “…needed to be replaced for other, because, according to the paper’s editorial line, the issue is not being treated”. Garrido told LGBT news site Sin Etiquetas that back in March El Universal spiked a column also dealing with this theme. In that case, the homophobic statements made then by former Police Reform Commissioner Freddy Bernal.

No matter how hard CONATEL’s honcho William Castillo insisted in Geneva that there’s no censorship in Venezuela, cases like El Universal not just proves him wrong but shows the true face of the hegemony he openly supports.

14 thoughts on “One year on, El Universal is fully “hegemonized””