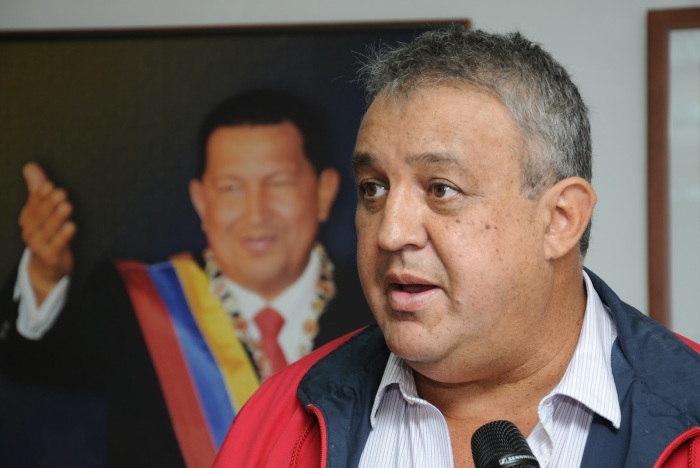 The guy over your shoulder – that’s your problem right there, Eulogio

There is an interesting piece in the Business Section of the [increasingly indispensable] Wall Street Journal focused on PDVSA President Eulogio del Pino.

I wouldn’t call it a profile per se – Del Pino did not make himself available to friend-of-the-blog Kejal Vyas, so he hovers over the story like a ghost. But the story claims del Pino is trying to veer the company into doing what it is supposed to be doing – producing oil, producing more of it, and doing so efficiently.

[del Pino’s] top task is to seek the $247 billion in investment that PDVSA says it needs between 2016 and 2019, a difficult proposition as the highest borrowing costs in the developing world all but close off access to debt markets.

Under Mr. del Pino, PDVSA is trying to woo investors by offering them more operational and financial control of oil projects. Some partners can invest in projects directly rather than going through a PDVSA intermediary and are being promised joint access to proceeds from oil sales using off-shore accounts. And a preferential exchange rate for oil firms helps keep production costs under $10 a barrel, making projects attractive despite oil’s slump, people close to PDVSA say.

But undoing years of shaky relations with foreign oil partners won’t be easy… India’s ONGC Videsh Ltd., for example, hasn’t been able to send about $500 million in backlogged dividends to its headquarters since 2009. Talks between the two companies are so fragile that one person familiar with the negotiations said ONGC is crossed between making multi-billion dollar investments or pulling out of the country entirely, much like Vietnam’s national oil company, which says it wants to leave [sic] and their Malaysian counterpart which already has.

My sense form reading the story is that del Pino is caught.

He may want to apply all that hardcore Stanford knowledge and make the company grow, but he is hampered by a reality – economic, but mostly political – that sees PDVSA as the country’s cash cow, in charge of winning elections and keeping the shelves in supermarkets somewhat stocked. Producing oil? That comes later.

PDVSA simply will not be able to get off the ground unless currency restrictions are lifted, and unless the government understands that the company needs breathing room to be able to focus on what it needs to do. It needs to do more than tinker with rules about investing that can be changed at will.

Investment can only come once the entire political structure the revolution is built on changes. del Pino simply does not have the political capital to do this, and it’s clear his bosses don’t either. His low-key public persona suggests he doesn’t have the intuition to develop it by going on the airwaves and making his appeal to the public, by picking a fight with the forces inside chavismo that are hampering his agenda.

Trying to be a technocrat in the times of chavismo is an almost impossible problem to solve. That’s something no amount of Stanford education can prepare you for.