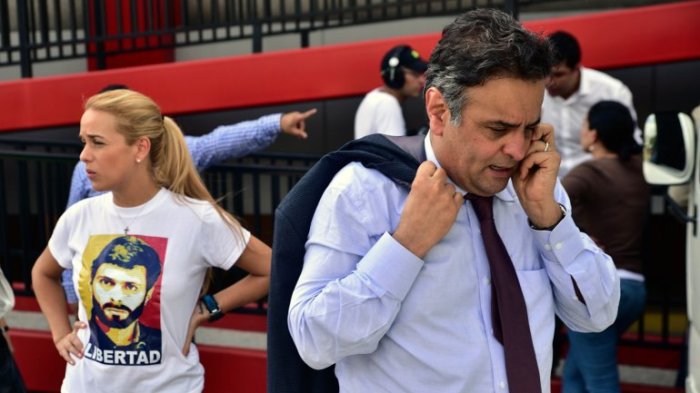 This account is adapted from an eyewitness report by Vente Venezuela activist Pedro Urruchurtu (@Urruchurtu). His original piece in Spanish is available at GuayoyoEnLetras.

A few days earlier, this group of Brazilian legislators had confirmed a State-sanctioned visit to Venezuela, which had been approved by the Brazilian Senate back in February – hardly the fly-by-night operation Dilma Roussef would later claim.

Their mission: to validate our country’s observance of Human Rights, to promote the announcement of an election date, and to give humanitarian support to the Venezuelan people.

Hundreds of reporters and camera crews, mostly Brazilian, had gathered and were buzzing around the airport since the early hours of the morning, hoping to cover what had already become a controversial story.

This media frenzy was quickly eclipsed by an all-out deployment of Venezuelan officials: the Minister of the Interior, Justice and Peace, flanked by dozens of high-ranking Criminal Investigation (CICPC) and INTERPOL agents, a bevy of government bureaucrats and Venezuelan media outlets gathered chaotically around the tarmac.

They were waiting for someone else.

Yonny Bolívar, the alleged killer of Adriana Urquiola and her unborn child, murdered last year during the political protests, will also be landing on Rampa 4 today. Bolívar had been captured a few days earlier to much fanfare in Colombia and was being extradited to face trial in Venezuela.

Sporadic rain and nervous expectation in the arrivals hall give way to hushed murmurs, as a military-cargo plane, a Hercules, suddenly lands unannounced on the exclusive presidential runway.

Finally, at around 12:15, a small Brazilian military aircraft lands in Maiquetía, after having been ordered into a drawn-out holding pattern before being granted permission to land.

Confusion and chaos follow: conflicting announcements of where the Senators will exit the terminal result in the welcoming committee and reporters scuttling about frantically, running outside, back inside, and all around the airport, panicked at the thought of losing track of the Brazilian legislators. No official information is available, even the Brazilian Embassy representatives are rightly baffled by the lack of protocol. Everyone is eventually forced to the outside curb and made to wait.

An hour after they land, Senators Aécio Neves , Aloysio Nunes, Ricardo Ferraço, Sergio Petecão, Ronaldo Caiado, José Agripino, Cassio Cunha and José Medeiros finally exit the aircraft and are shuttled by a Brazilian Embassy van to the outside area of the arrivals terminal. A politically diverse mission, the group of eight boasts a former opposition Presidential Candidate, social democrats, conservatives and even an ally of Dilma Rouseff’s Workers’ Party.

When they finally spot the van, blindsided members of the press and opposition leaders sprint across the arrivals terminal exterior and finally engage the Senators for the first time. Senator Neves gives a brief, yet surprisingly jovial statement about the democratic and humanitarian nature of this visit. Effusive greetings and welcomes are exchanged between Venezuelan hostesses and their guests, and everyone boards their respective vans, tired, annoyed, and blissfully unaware of what is to come.

The motorcade sets off for the 30 minute drive to Caracas, flanked by a detail of National Police Diplomatic Service escorts, already late for what was to bee a jam-packed schedule for this short stay: a visit to Leopoldo López in Ramo Verde military prison and to Antonio Ledezma under house arrest, a meeting with victims of repression and Human Rights violations in Caracas, and a working supper with representatives of the opposition coalition, the Mesa de Unidad (MUD).

As if on cue, smartphones start blowing up, flooded with reports and rumors about traffic conditions in and around the capital. A wreck involving a cargo truck has blocked off transit exits from Caracas. Incoming traffic was paralyzed due to unscheduled cleaning being performed on two tunnels that lead to the city. (Who’s ever heard of Boquerón getting cleaned at noon on a weekday? That’s some Chris Christie stuff right there.)

Meanwhile, the Panamerican Highway leading to Ramo Verde prison, and all alternative routes to access Caracas and Los Teques are completely obstructed by pro-government demonstration. The Senators insist on carrying on with their plans, undeterred.

While in a gridlocked traffic jam, and before the watchful eyes of the National Police escorts, the motorcade is accosted by a violent group of protesters, who throw trash, stones and blunt objects at the van amidst insults and shouts of “go away!” The police detail does little to dissuade the protestors or to part the traffic, as is usually the case when government officials must travel by road.

Another hour transpires while Machado tries to negotiate with the authorities; the vans parked by the side of the highway, senators sitting patiently inside. Requests to be escorted through the carretera vieja, an alternate, poorly maintained road into Caracas, were denied by policemen who argued they were unprepared to accompany the motorcade on such a dangerous route.

In the press van, whispers of “this is a dictatorship,” “Maduro is a dictator,” could be heard from Brazilian journalists.

Realizing little can be done, and with Senators in need of bathroom breaks and electrical outlets for phone charging, the entire motorcade returns to the airport.

Back in Maiquetía, permission to park is denied. Access to the auxiliary terminal that had been designated for the purpose of this visit was now restricted. State Intelligence (SEBIN) agents close off the premises and begin to film the proceedings, without as much as a word.

Two more hours go by, curbside under the metallic La Guaira sun. Experiencing a dose of the humiliation that Venezuelans must endure every day at the hands of the State, the Brazilian Senators and their hostesses enter and exit the vans by the side of the closed-off terminal, confer with each other, evaluate safety concerns, logistics, and where to pee.

Calls are made to the Brazilian Senate, to the Foreign Affairs Ministry. The Brazilian Congress suspends its plenary session in solidarity. Itamaraty is silent.

An opportunistic buhonero with an improvised food cart hits pay dirt: his entire stock of chucherías, bottled water and plantain chips is ravaged by the hungry crowd. An old man on a bike shows up with empanadas, arepas, and papelón con limón, thankful to the Brazilians for stimulating our informal economy. He also sells out his entire inventory.

Meanwhile, a gathering of opposition activists and political leaders have been waiting outside Ramo Verde for hours. Victims of repression had traveled from all around the country to meet the Senators in Caracas. Many interviews and press encounters have been scheduled. A Venezuela-Perú soccer match is about to begin. This may alleviate traffic conditions. Reports come in about a partial opening of the throughway. The plane must leave at 8 pm. There is still time.

The Senators take a cue from the informality of their surroundings and throw protocol out the window. Their commitment to this agenda is genuine and their concern ever mounting. Optimism and resolve set in.

“Let’s go to Ramo Verde,” is the unanimous rallying cry.

But their enthusiasm is quashed by the view from the on-ramp. The highway remains at a standstill, a parking lot of bumper-to-bumper traffic as far as the eye can see.

At 6:00 pm the motorcade makes its final return to the Airport. Out of options and out of time, the group of Senators must board their plane, and end their visit to Venezuela before it even begins. In a matter of hours, and confining them to a 10 km. stretch of asphalt and air conditioning, the Venezuelan government facilitated these men a more profound understanding of our political situation than miles of road travel and hours of interviews could ever have.

Before being shoved along regular immigration queues, passports in hand, the Brazilian Senators have one last statement to make: “We came on a humanitarian mission, and what we found is a dictatorship,” declared Neves on behalf of his colleagues.

At some point between the hurling-of-sticks-at-the-van and the search-for proper-drinking-water, Venezuelan government party (PSUV) member of parliament Saúl Ortega weighed in on the situation.

“These individuals come to Venezuela to promote impunity […] to provoke and defy […] they are anti-Venezuelan […] They are partisan agents, not representatives of the Brazilian State […] Why should our government guarantee their safety? Whenever I travel no one guarantees mine […] I respect the laws and institutions of the countries I travel to, these people violate ours.

I’m sure the tens of thousands of drivers who were forced to wait in traffic for up to six hours that day felt exactly the same.

37 thoughts on “The Brazilian Senators: What Actually Happened”