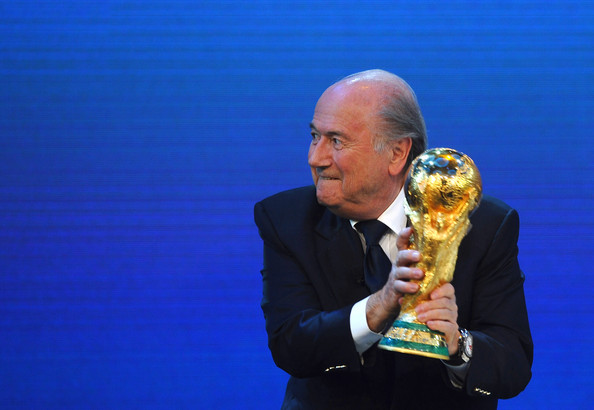 I freely admit I’ve gotten sucked all the way into the FIFA saga this week, wasting hours on end watching the Guardian live page for updates, gorging on every sordid twist and turn in the tale. (My favorite so far? This.)

At first I thought I was just a fútbol fan reading up on a story of interest to me. But soon, I started to suspect something deeper was at play.

For who, in the end, is Sepp Blatter? What does he stand for? What did he do to make me so angry?

But he went farther than that. Blatter built a system around his corruption to protect it. To make it unassailable, self-perpetuating, endlessly opaque and completely immune to critical scrutiny from outsiders. Slowly, painstakingly, from the ground up, he built the perfect racket. If it didn’t turn your stomach so much, you might be tempted to admire it.

Running on a nearly endless supply of chutzpah, on a shamelessness that just doesn’t give a shit about any of the conventional boundaries of polite society, and on a limitless – and, worse, justified – faith that the thing he was selling was something people would always want to buy, no matter how disgusting his organization became, Sepp Blatter did something far worse than mere racketeering. He sullied a part of my childhood. He debased my identity. He cheapened me.

And then it hit me: no somos suizos my ass. Blatter is just Chávez in a more expensive suit.

This, I think, accounts for my rampant schadenfreude over the last 48 hours. There’s been a strong undercurrent of displaced wish fulfillment to the FIFA saga for me, of getting to see, somehow, the day of reckoning Chávez deserved but never quite faced. It’s been…intoxicating.

Because so much of the angst of these last few years, so much of the frustrechera and that barely repressed need to sob so many of us carry with us all day, every day comes down to that, doesn’t it? That desperate howl of rage, never quite appeased, at seeing sheer evil get away with it. At seeing evil rewarded with spoils we all know it doesn’t deserve. At witnessing the way the institutions evil erected to protect itself from the wrath of its victims really are impregnable, seeing how they allow evil to parade its contempt for the ordinary mores of society day in and day out, rubbing our faces in its power and our powerlessness through the expedient of just never even deigning to answer the questions we put to it.

For the entire period between 1999 and 2011, I tended to assume that house of cards had to collapse, that it would collapse, that it was in the nature of things for it to collapse. Then cancer robbed us of even that, leaving us in the hands of the only thing that could’ve been worse than a talented charismatic autocrat: a talentless, charisma-bypassed bureaucrat who shares with his boss only that deep, down-to-the-bone contempt for the values of the powerless.

And that is a wound that will not heal.

On Wednesday, Loretta Lynch gave me a taste, a narcotic whiff of what it might feel like, one day, to see that wound start to heal. She did it in precisely the way we’re constantly being admonished to realize will never, can never happen in Venezuela: a deus ex machina intervention from Washington. I know it’s childish. I know FIFA is not Venezuela and that for us, that solution is no solution.

The thinking part of my brain knows that, anyway. The wounded child in me, I’m afraid, doesn’t. And I won’t lie: to him, the FIFA implosion is mindblowingly intoxicating.

I need another hit.