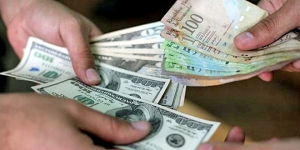 It’s easy to be dispirited by Maduro’s address last night.

The three-hour rant was only occasionally peppered with substantive announcements, and none of them were clear enough to really know where the government is headed. But even if we take the most optimistic of views about the substance of what he said – and this note by Reuters’ Andrew Cawthorne and Alexandra Ulmer is the closest you can get to interpreting Maduro seriously – what was announced is still not enough to get us out of this jam.

If we interpret Maduro correctly, we can expect a devaluation in the near future. The official 6.3 exchange rate will remain for “priority imports,” and the two other official rates (of 12-ish and 50-ish) will be changed. The 12 and 50 rate will be merged into a single exchange rate – details coming soon, we hope – and a new, free exchange rate will also be set up.

The end result will probably be a devaluation. Just what the doctor ordered, right?

By keeping in place the multi-tier system, Maduro is doing nothing to tackle the underlying distortions that are actually at the root of this economic mess. It makes no sense to devalue and leave the underlying distortions in place. No matter how much you devalue, people will still try to game the system, taking advantage of the cheap exchange rate to make a buck with the unofficial one and leaving stores depleted in the process.

As Ricardo Hausmann pointed out in his rebuttal to Francisco Rodríguez a few weeks ago,

Selling Venezuela the illusion that this can be fixed with a simple exchange rate measure that is practically cost-free and does not involve anyone is a deep analytical mistake. The problems run much deeper that that, and one more devaluation (one of many), while leaving the rest of the policies intact, is just that: one more devaluation.

The devaluation doesn’t even solve the country’s fiscal mess. It makes no sense to devalue and at the same time announce a massive public spending program which will ultimately drive up inflation and leave the government in the same place it started. Ultimately, spending will have to rise because everyhting will be more expensive. It’s the path to hyperinflation the one we are embarked on.

That, to me, was the most disappointing part. Maduro made it sound as if he was taking substantive measures, but he really wasn’t. As he said, he is only “deepening” the model that led us here.

The end result will be a “deepening” of the problems we are facing.