The decades-old feud between the US and Cuba is coming to an end. After exchanging political prisoners – one Alan Gross in exchage for three Cubans held in the US – Presidents Obama and Castro will make major announcements today. Sources are confirming they will announce  a major easing of the embargo, and future diplomatic relations between the two countries.

This is a major development for Venezuela. It points to the seriousness of Venezuela’s economic situation – finding itself unable to support Cuba for much longer-, and it potentially leaves Nicolás Maduro as Washington’s main antagonist in the continent. After all, the US has not had an Ambassador in Caracas since the last decade.

We’ll be live-blogging the events, and also linking to interesting analyses that we find.

10:34 AM: Who knew? There is a mutual fund that is closely tied to the easing of the Cuban embargo. Bloomberg is saying that it is soaring today.

10:37 AM: Nothing yet from Rep. Ileana Ros-Lehtinen. Nothing yet on the webpage of Sen. Marco Rubio. Sen. Bob Menendez has released a statement blasting the prisoner swap, saying that “[t]rading Mr. Gross for three convicted criminals sets an extremely dangerous precedent.  It invites dictatorial and rogue regimes to use Americans serving overseas as bargaining chips.  I fear that today’s actions will put at risk the thousands of Americans that work overseas to support civil society, advocate for access to information, provide humanitarian services, and promote democratic reforms.”

10:41 AM: The Granma webpage (official news outlet of the Cuban government) is kaput. This is probably the most traffic they’ve had in ages.

10:51 AM: Sen. Marco Rubio, as quoted by the AP: “This is going to do absolutely nothing to further human rights and democracy in Cuba,” Rubio said in an interview. “But it potentially goes a long way in providing the economic lift that the Castro regime needs to become permanent fixtures in Cuba for generations to come.” Pushback from Cuban-Americans in Congress, as expected.

10:56 AM: From the New York Times: “Today marks the beginning of a major new chapter in U.S.-Cuban relations,” said Julia Sweig, director of Latin American studies at the Council on Foreign Relations. “Finally we have an American president willing to do the right thing for the national interest, for American standing in Latin America, and for the Cuban people.”

11:02 AM: Some commenters who are wiser than I am are saying that lifting the embargo would require one (or more) acts of Congress. Obama can ease it, but can’t do away with it.

11:15 AM: Commenting from Tokyo, a jet-lagged Quico says that Venezuelan government news outlets are asleep at the switch. They have been blindsided with these news.

12:27 PM: This bit jumped out at me: US credit and debit cards will be permitted for use by travelers to Cuba.

12:30 PM: Rep. Ileana Ros-Lehtinen publishes a statement saying Obama may be breaking the law. “This misguided action by President Obama will embolden the Castro regime to continue its illicit activities, trample on fundamental freedoms, and disregard democratic principles.”

12:31 PM: Significant efforts by Pope Francis and by Canada in these developments.

12:35 PM: Sen. Marco Rubio pulls no punches: “While business interests seeking to line their pockets, aided by the editorial page of The New York Times, have begun a significant campaign to paper over the facts about the regime in Havana, the reality is clear. Cuba, like Syria, Iran, and Sudan, remains a state sponsor of terrorism. It continues to actively work with regimes like North Korea to illegally traffic weapons in our hemisphere in violation of several United Nations Security Council Resolutions. It colludes with America’s enemies, near and far, to threaten us and everything we hold dear. But most importantly, the regime’s brutal treatment of the Cuban people has continued unabated. Dissidents are harassed, imprisoned and even killed. Access to information is restricted and controlled by the regime. That is why even more than just putting U.S. national security at risk, President Obama is letting down the Cuban people, who still yearn to be free.”

12:38 PM: Reading the NY Times story, it’s clear that Obama wanted to do more, but that this is as far as his Executive powers let him go. It’s significant that he says the embargo should be lifted … unconditionally.

12:41 PM: Alright, that’s all for now. This is a historic event, one that will have wide-ranging consequences in Miami, Havana, and Caracas. Regardless, I keep coming back to the idea that Washington’s #1 nemesis in the Hemisphere is now … Nicolás Maduro. 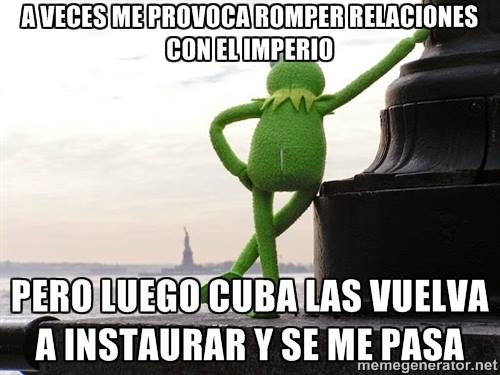 115 thoughts on “Live-blogging the Cuban thaw-mageddon”