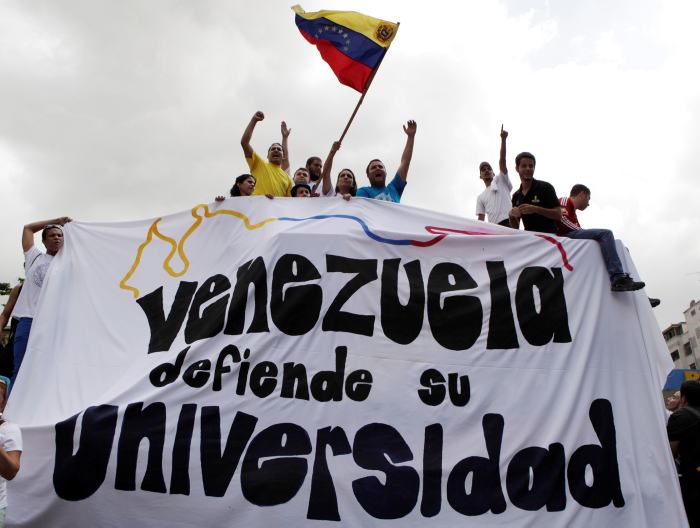 Where are my rents?

This is an uncomfortable letter to write.

In the past few weeks we have come to the stark realization that our government is bankrupt. Not just morally bankrupt, we knew that, but pelando cable bankrupt – so bankrupt that the debate on economic policy right now is on whether the fiscal deficit is closer to 15 or to 20 % of GDP.

I don’t have to tell you that universities are feeling the pinch, and they are feeling it hard. Some reports I have read claim that universities only received a small fraction of what they asked for. Others say that they can’t even pay for wages. The situation is … dramatic. You are pissed, and rightly so, but we need to lay some hard truths on the table.

You are protesting for the wrong reasons.

Venezuela’s public university model is broken, and it has been broken for years. Back in the early 90s, my friend Francisco Monaldi wrote his undergraduate thesis on the notion that public education was unviable – cost overruns, a shrinking budget, and the pressing need to spend scarce education dollars where they are actually needed (i.e., helping a poor kid develop reading comprehension instead of paying for rich kids’ entire medical school) meant that reform was pressing, urgent, and inevitable. Or so we thought.

Twenty-odd years later, and we are still fighting for the same things. Public university professors now make peanuts, much less than any time in the past, and the situation is not bound to change. Do you think the government will give in to your protests for higher budgets?

Not a chance. The government hates you guys – after all, chavismo loses each and every university election it contests. And weren’t your students the kids blocking the streets a few months ago? Consider this payback. It hurts, I know.

However, we shouldn’t put all the blame on Maduro’s feet. He may well hate universities, but the collapse of the system was inevitable. Your measly wages are not entirely a chavista policy choice, but rather a symptom of a crumbling educational model. What you should be protesting for, instead, is a change in the system.

Unless Venezuela changes its ways and allows public universities to raise funds in other ways, i.e. by charging rich kids for tuition, nothing will change. We need to face the fact that subsidizing the supply of university education is simply not sustainable in a country with such pressing needs as Venezuela. We have crumbling infrastructure, crumbling public schools, crumbling hospitals, and yes, crumbling universities – but hey, they’re free!

Fighting for your piece of the petro-pie, a piece you will not get, makes you look petty, hopeless even. Insisting on this means the difference between you and the poor souls of Sidor asking for a lifeline for an unviable State-owned industry … is that you guys have fancier degrees. Ultimately, fighting for your budget is simply a defense of the status quo, the one that allows rich kids to go to Dental School without paying for tuition. At best, it’s politically naive. At worst, it’s immoral.

I began this letter by saying it made me uncomfortable to write it. I am an academic, and I do OK because I live in a country where the market system works (por ahora!), and where – unlike in Venezuela – my contributions are valued justly. So I don’t blame you if you deem it uncaring for me to pontificate about your situation from my lofty ivory tower. I get that.

However, know that I say all of this from a place of empathy. I really feel for Venezuela’s universities, as well as for your personal situations, but I think a healthy degree of honesty wouldn’t hurt us. The truth of the problem is that our model of university education, the one we all grew up in, is gone for good. We need to face that reality and press for change – not for an increase in the budget, but for real change, one that will make your institutions viable. In order to do that, you must put aside the hole you feel in your checking account and start pressing for a real solution to the problem.

I know this is easy for me to say, but we need to look at the problem in the abstract and recognize it for what it is: your lost budgets, sadly, are never coming back. It’s not too much to ask for a bit of serious thought about this.

After all, if anyone in Venezuela is still capable of abstract thinking about the issues, it should be you.

77 thoughts on “A letter to a Venezuelan academic”