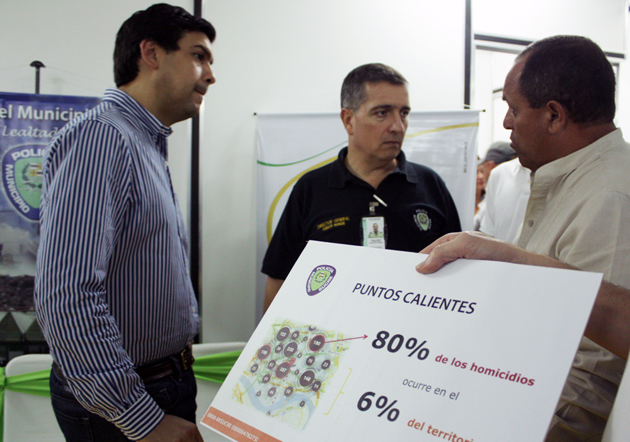 Before the economic storm severely hit Venezuelans wallets, crime was people’s biggest national concern, topping scarcity, inequality, inflation or anything. In spite of being bumped, it is still is a huge concern. But … what can we do about it? As it turns out, sometimes the answer involves just a little bit of ingenuity, and a lot of guts.

In 1989 Venezuela’s homicide rate was 13 per every hundred thousand persons. By 2012 that number had increased four-fold, reaching 54 per every hundred thousand, and 79 by 2013. This was confirmed by the Venezuelan Government official statistics, and also by the UNODC’s 2013 global study on homicide (the 2013 numbers are claimed by the Observatorio Venezolano de Violencia, although we have our issues with those figures).

The World Health Organization says that a country faces an epidemic of violence when the homicide rate exceeds 10 murders per every hundred thousand persons. According to this, Venezuela has been suffering from an epidemic ever since the not-so-roaring 1990s, crippling the state’s capacity to cope with crime. To add some perspective to this dreadful plight, only two out of 145 countries since 1995 (El Salvador and Honduras) have topped Venezuela’s homicide rate. As a matter of fact thanks to Honduras staggering violence, Venezuela is not yet labelled as the most violent place on Earth. It is, by far, the most violent “large” country in the world.

At a time when both the developing and developed world in general have neutralized a surge in violence, Venezuela’s Government has designed, implemented and scratched 20 security plans over the last 15 years in the efforts contain violence in the oil-rich nation. All of them have failed. This lack of continuity in public policy (among other things) has been a key determinant for explaining the crumbling state of affairs in the streets.

As the economic crisis depletes the state’s coffers, less money is allotted towards fighting crime. UNder these circumstances, how is it possible to at least ameliorate the rampant crime wave in Venezuela?

This question was assessed and tackled by Sucre municipality in eastern Caracas. Sucre has around 1,2 million inhabitants dwelling in its territory (although INE says it is half that number), ranging from a few spaces of middle-class neighbourhoods to a vast dominion of shantytowns, reflecting Sucre’s overwhelming poor-majority barrio populace. From 2000 till 2004, Sucre had about 500 homicides per year, or roughly 49 homicides per every hundred thousand persons. Ranging from 2005 till 2008 (the previous mayor’s last tenure in office) it had risen to 562 homicides per year, and an average of 54 homicides per every hundred thousand persons.

In 2009, the arrival of a new administration led by mayor Carlos Ocariz, a prominent figure of the Primero Justicia opposition party, security was made a key priority. Ocariz though Sucre could promote the idea that violence could be contained just as Medellin in Colombia. In 2008, 722 homicides took place within Sucre’s territory, and by 2013 the number had decreased to 498.

The main drivers behind this decline were improving Sucre’s police department (one of the biggest in the country), and bolstering social policies aimed specially at the youth. But these things cost money, and Sucre’s cash-strapped budget needed some rethinking. So in the midst of 2013, in partnership with researchers from CAF and friend of the blog Dorothy Kronick, Sucre launched a pilot program called “Puntos Calientes” (Hotspots), one I had the priviledge of participating in when I was working as a public policy analyst in Sucre.

Puntos Calientes was designed to pinpoint the concentration of violence in Sucre at a microlevel, evaluate the administration’s public policy impact in such microplaces, and minimize the incidence of violence through effective and intelligent patrolling in those areas. The study concluded that 80% of the violence in Sucre (homicides, wounded from arms) was concentrated in just 6% of its territory. So by highlighting the street corners, the little alleys and stairs where most of the action was taking place, Sucre’s policemen (Polisucre) were better equipped when engaging against criminals in their patrolling routes. Sucre also intervened in those places by promoting cultural activities such as movie nights to take control of those crime-ridden places away from gangs.

After the first three months of implementing this pilot program, we observed a 26% drop in violence vis-a-vis the same period a year before, showing good signs of a possible expansion of this public policy.

Still, results were premature, although Sucre is considering expanding the program in middle class neighbourhoods as you’re reading this. But even if it’s doomed to fail for whatever reason, or even if correlation doesn’t translate into causality for grading Puntos Calientes with an “A”, Sucre deserves some credit for thinking outside of the box.

Last but certainly not least I leave a video made by CAF and the Sucre mayor’s office explaining more thoroughly what’s this plan all about.

This approach has been tried in many places, and has usually worked. In fact, early on in the Chávez administration, Caracas mayor Alfredo Peña brought former NYPD chief William Bratton to Caracas to help implement such a thing. Funding dried up, and the efforts were quickly abandoned once the government went to war against Peña, and the opposition at large.

Sucre’s effective implementation of this program is a sign that you don’t need huge sums to fight crime. All it takes is a little brain power to use the funds you have where they are needed the most.