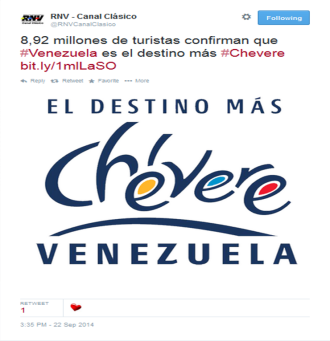 It reads, more or less, “8.92 million tourists confirm that #Venezuela is the most #Chévere [cool] destination”.

This tweet seemed kind of misleading… and we were right.

Those 8.92 million were domestic tourists, Venezuelans that mobilized throughout the country during the summer holidays. This number also meant that domestic tourism increased by 22.23% in one year.

Many like to stay in Venezuela during the holidays. But there are many others that simply can’t afford to travel abroad. And those that can afford it probably weren’t able to get a plane ticket.

Now, don’t get us wrong: we love Venezuela. But it’s a fact that international tourism has declined due to high crime levels and poor infrastructure.

It’s not surprising that despite being ranked 24th for its natural resources, the World Economic Forum ranked Venezuela third from last in the region and 113th overall in terms of travel and tourism competitiveness. The WEF explains:

“among the most important concerns are a lack of safety and security (ranked 131st), the low prioritization of the tourism industry (120th), and a policy environment that is not conducive to the development of the sector (137th). Property rights are not well protected in the country, and FDI is not encouraged (ranked 140th, last out of all countries, for both indicators). Further, Venezuela receives the poorest assessment of all countries for its affinity for Travel & Tourism (140th). In addition, infrastructure is in need of significant upgrading, particularly ground transport infrastructure (ranked 139th)”.

13 thoughts on “Venezuela not so Chévere”