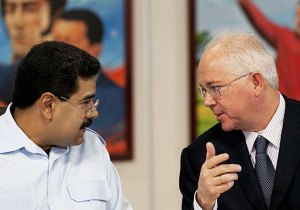 One of these men controls Venezuela. The other used to be a bus driver.

Whomever you choose to support in the current debate raging among Venezuelan economists (suggesting, by the way, that we economists need to tone it down and get out more), there is one thing we can all agree on: Rafael Ramírez is firmly in control of economic policy.

This doesn’t mean he’s in control of the government, but it does mean that he has consolidated his grip on power, particularly with regards to economic decisions.

Factors inside chavismo will resist any inclinations to implement what he laid out in his now famous London speech. And his moves will require something he doesn’t have: political leadership. If he were working for a President who could compensate for that, things would be different. Instead, he is working for Maduro.

No person in Venezuelan history has ever held the job of Oil Minister, President of PDVSA, and Chief Economic Minister. I venture to say that nobody short of Hugo Chávez has ever wielded as much power in modern Venezuelan history. Is it an exaggeration to suggest Ramírez is now more powerful than Maduro?

I tried to convey that in my latest piece for Foreign Policy’s Transitions blog. The value added:

Yet after years of dealing with the world’s oil companies, he could be described as a skilled negotiator. Ramírez will need all the skills he possesses to navigate the waters of power in Caracas.”