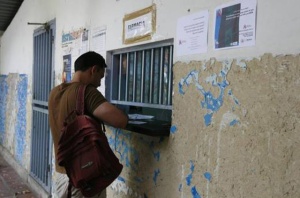 Dr. Martín Carvallo, who heads the Hospital Universitario’s HIV department, doesn’t know what to tell his patients when they ask what they can do when they can’t get the anti-retrovirals they need.

Paint is peeling off the blue walls of the Infectious Diseases Unit in what is supposed to be the flagship teaching hospital of the Universidad Central de Venezuela, i.e., the nation’s top med school. Barely any air comes in through open windows in this very hot Caracas morning. Although Dr. Carvallo says the department is pretty empty compared to other days, it feels quite full.

Uneasy faces wait for answers, and for most-likely-unavailable drugs. The hallway is long enough to fix eyes on the infinite, but narrow enough to notice the unavoidable presence of others, and wonder how much time they have spent in such an obviously anxious state of mind.

Dr. Carvallo is checking on hospitalized patients whose immune systems, because of the months-long lack of antiretrovirals, are too weak to fight Tuberculosis, Meningitis or Kaposi Sarcomas.

“There’s basically nothing to treat these patients with,” Dr. Carvallo says, as we enter a room with four patients covered by blue curtains and about five family members leaning on the walls. There is a little terrace with a couple of seats where two men and a woman are  looking outside, to the people in lines, some of them tired enough to sit on the floor.

“It’s the same problem going on in every area in this country. Improvisation, unclear management of everything, change of suppliers all the time that end up not providing the products due to large debts. The WHO (World Health Organization) says we’re not yet Uganda or Ethiopia. We’re not there yet … but we will be soon,” he chuckles nervously.

A woman stands up rapidly when the doctor comes into the room. She approaches him with a broken smile. She waits for his attention while  a group of nurses standing inside one of the curtains ask him what to prescribe a patient if most of the drugs he needs are missing.

“How much time did he spend without treatment before coming?” the doctor asks the brown-skinned woman. “Emmm bueno … since like December we couldn’t find one of the drugs in the combination so we couldn’t give him anything. Now we are waiting for drugs to be available. Starting May we have been able to find some, but we don’t know when they’ll disappear again.”

The doctor breaks the twenty-second silent-interchanging of disturbed looks. “How’s he feeling?” he asks, pointing to the sleeping patient whose position isn’t very natural, or at least doesn’t seem comfortable. “He’s a lot better,” his companion answers. She tries to wake him up by touching his uncovered belly, but he half-smiles and signals with his hand to be left alone.

“This is an exceptional case, to have to hospitalize a patient like this. What really happens is that the patient’s deterioration takes long, but that muchacho spent 5 months with no treatment, so he’s now in very bad shape,” the doctor says, walking as fast as he talks.

“There are like sixty-five thousand patients receiving treatment in the country. We receive about ten percent of them,” he says, referring to the Universitario, a public entity supported by the government. “There are normally about twenty types of antiretrovirals in the country, of about thirty that exist in the world. Most of them are now not available.”

The doctor stops by a little pharmacy where patients are lined up, in order to talk to the lady working the counter. He asks which drugs are missing that day, and she mentions four – the main ones failing. She shows him an article about missing medicines in the news. “Gracias Victoria, let’s go” he says.

“You saw that line?” the doctor asks, “at least half of those patients are standing there even though they know that  what they need is not available. In moments like this, the government is desperate to bring medicines, but getting them is not like just going to a store and asking for 30 thousand pots of abacavir. It’s complicated, and it takes time.”

“The ministerio’s answer is always to bury their head deeper in the ground,” he says, frustrated. “They say there are containers coming and that they’re in La Guaira, but they never end up coming. Since October the failure has been more continuous than ever.”

Arriving at his office, he stops on his tracks when he hears a patient complain, “So … the doctor gets here at 10 am.”

He turns and says to me, loudly for the patient to hear, “they don’t complain about missing medicines but they do complain about doctors getting here at 10 am. They complain with us, but are incapable of saying anything to the ministry.”

He then turns to the patient: “Yes, the doctor was in a meeting, and is now here, although it is not even his turn to be here.”

He finally sits down in a small space that doesn’t seem like his personal office. It is completely empty except for a metallic table and two chairs. The walls are dirty white with nothing hanging on them, and there is a small open window.  “Fijate,” he says as he takes out a piece of paper.

“Normally 70% of patients with HIV don’t get very sick while taking treatment.” He writes down some drug abbreviations and places them in various combinations. “Of course, without treatment, all of them fail. But normally when patients start failing it’s because they create resistance to a certain combination of drugs.”

He starts to draw arrows from one abbreviation to another. “So you need to give him a more complex treatment. You give them certain drugs separately and combine them with others.”

“The problem here, now, is that drugs aren’t available separately, so the patients who need more complicated treatments are the ones that are affected the most.”  He crosses out some of the drugs. “And as the woman told you back there, if there’s only one drug missing, you can’t give them anything.”

With the pen he points to each drug abbreviation. “The biggest problem is that it is not only one drug missing, all of them are missing at some point.” He finally draws a big X on top of all the scribbling which makes his incomprehensible handwriting even more obscure.

“They’re available for 10 days and then they disappear again but then another one fails.”  He looks up, touches his chin and raises his eyebrows. “And that’s the worse thing that can happen to a patient.”

Not being able to find milk is one thing, but for HIV+ people, the growing shortage of antiretroviral drugs is much more than an inconvenience.

The Government’s VIH/SIDA program is responsible for the supply and distribution of the drugs. Yet its coordinator, Miguel Morales denied that there were any shortages at all and he blamed “community organizations, non-governmental organizations, doctors and regional coordinators” that he says “aren’t doing the job of bringing the medicines to patients in the right way”.

Yet scarcity is more than evident. You can see it with your own eyes if you just venture to the Hospital Clínico at the Universidad Central de Venezuela like I did.

As I left, I wondered how cold-blooded bureaucrats like Morales have to be … to deny the problems faced by the people waiting in lines, hospitalized patients, desperate family members- like the smiling brown-skinned woman – and most of all, the doctors who encounter each of the affected ones, face to face, only to say “there’s nothing I can do”.

30 thoughts on “Life in short supply”