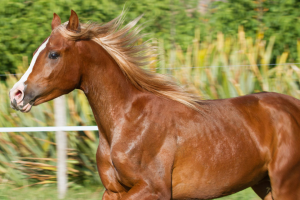 … or a modest proposal for Venezuela

The Emperor Gaius Caligula Caesar enjoys a hallowed a place within popular imagination. With the possible exception of Nero, whose alleged stint at fighting fire with music has historically received mixed reviews, it is Caligula’s reign that is remembered as the very apex of Ancient Roman lunacy. On one occasion he is said to have “declared war” on the god Neptune, ordering his legions to march into the sea in fully armored formation, and triumphantly bringing cartloads of seashells and dead crabs to Rome as “plunder.”

I won’t even begin to get into his legendary reputation for sexual sadism.

Yet by far the most celebrated of Caligula’s ancient eccentricities, is the story of Incitatus: the Emperor’s favorite horse, whom he elevated to the Roman Senate, and eventually made Consul.

While modern experts are quick to dismiss the historicity of such outlandish tales – likening their author, Suetonius, to a modern yellow journalist – I believe that we should give it the report the benefit of the doubt. After all, we weren’t there, and should we choose to lend it credence, we may well glean some useful context, and mayhap even a potential solution, to the many problems facing our beloved Venezuela today.

Let us assume then that Suetonius was right about the facts, but he still may have erred a bit as to their interpretation. Perhaps the assisted rise of history’s first great equine politician –or “hippoconsul”– was not an irrational act by a schizophrenic Caesar but instead a highly symbolic, and politically calculated, illustration of the prevailing institutional power dynamic. Such a move would certainly make for a stark, and very public, illustration as to the importance of vestigial republican institutions in the era of empire.

“Gentlemen, I have decided to promote an animal from within my household to join you in your illustrious political body. Clearly, he can fulfill your vaunted responsibilities much the same as any of you can and the announcement will be made public tomorrow morning at daybreak. You can bitch and moan if you like, but my mind is made up. Rome has spoken.”

Even the horse’s name, Incitatus, is provocative, quite clearly derived from the Latin “incitāre”: root to the English word “incite” and one that carries an identical meaning. In inciting the Roman Senate into an understandable bout of righteous indignation at being disrespected, their inability to stop him would highlight just how helpless and irrelevant the institution had become. The humiliation would be absolute, and the message so powerful that, over twenty centuries later, we remember it.

Venezuela’s current government likewise shares a fondness for state actions aimed at symbolically degrading those they perceive as foes, and that will in turn illustrate the victim’s utter helplessness to do anything in response. Don’t believe me? Just ask Antonio Ledezma.

This rise of the rote political humiliation as a regular facet of the Venezuelan political landscape was perhaps inevitable. A regime that places far greater value on loyalty than on efficacy must find ways to unmistakably signal the extent to which compliance and attitude are the keys to success, and individual initiative is to be avoided. As a result of this philosophy, obedience has become so engrained within the DNA of the ruling party that if the Venezuelan president were to order a few brigades over to Higuerote to “attack Neptune” there is little doubt that the order would be followed.

Although perhaps we are giving Caligula a bit too much credit. Perhaps he did raise up his animal entirely on a whim, and without any overarching logic, or method to his madness. This is not entirely unfamiliar territory for Venezuelans: the ailing omnipotent leader, promoting a beloved and loyal companion to the loftiest of positions despite the latter’s considerable lack of qualifications for the role.

Or maybe they were on to something. Horses are animals that have been selectively bred over millennia to gallop without hesitation into physical danger, only to placate a fellow on his back. If the state truly does value loyalty over competency, perhaps it should consider going a step further … In this light I suspect that horses may indeed be strong candidates for roles throughout the Venezuelan government bureaucracy in future.

We could start by sending a few select Incitatii to fill the looming vacancies within the CNE and Supreme Court. After all, horses are used to wearing blinders, and so the transition is unlikely to be very difficult.

Following the success of this initial salvo, we could in turn move on to appointing some steeds to positions of leadership within the National Assembly. Given the equine proclivity for behaving like animals, these diputado pioneers would likely fit right in. The perfect revolutionary politicians: their loyalty would be absolute. As a bonus, this new breed of politician would almost certainly be less corrupt and ambitious, instead remaining satiated and grateful at devouring the mountains of paja regularly heaped on all Venezuelan by their national government.

Indeed the only tricky part would be finding out from where exactly on can import some horses.