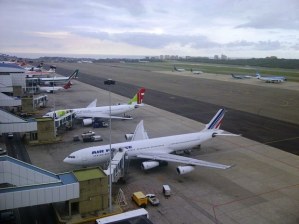 Remind me again why we are here.

The ongoing saga between international airlines and the Venezuelan government continues. Just when you thought airlines were going to get their money, the government is now suggesting they will only get paid in part, and at a much higher rate than previously thought.

According to El Mundo, the government is playing hard ball as usual, and is gunning to pay them 70% of what they owe, and at the Sicad I rate (roughly 11 BsF per dollar).

The way this works is the following: suppose Air Diosdado, for example, sold tickets to the Cayman Islands at BsF 1,000, under the promise that it would be able to translate those BsFs into dollars at a rate of BsF 6.3 per dollar. In other words, Air Diosdado sold the ticket for what it believed was $158.73.

Is it any wonder that airlines are leaving the country in droves?