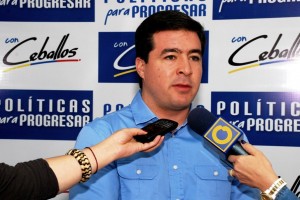 Daniel Ceballos, the mayor of San Cristóbal, was arrested in Caracas tonight. The person confirming this was the Interior Minister.

The Interior Minister is not in charge of the Prosecutor’s Office. In theory he doesn’t control the courts. But he puts people in jail, for “facilitating and supporting irrational violence” in the city that he rules (ruled?). Supporting violence is a made-up crime, something that simply does not exist in Venezuela’s legislation.

Ceballos, a prominent member of Leopoldo López’s practically-illegal political party, won the election with 67% of the vote. He was arrested without a court warrant, according to El Universal. However, even if he had been presented with one, it still doesn’t give the Interior Minister the authority to be speaking about legal procedures. It’s simply not something the Executive Power should be doing. Then again, we already know the separation of powers is a bourgeois construct only wusses can support.

The government continues doing its best to heighten the political tension. Ceballo’s surprise detention comes when Maria Corina Machado is also coming under siege, and when another opposition mayor, Enzo Scarano, is also imprisoned.

Everything the government does … makes people on the streets angrier. Escalation is the only game in town.

Ceballos’ fate is worth pondering. Next time some PSF says “just win an election” when arguing against the protests, you can say that Ceballos won his election resoundingly, and it’s landed him in the Helicoide.

26 thoughts on “Just win an election”