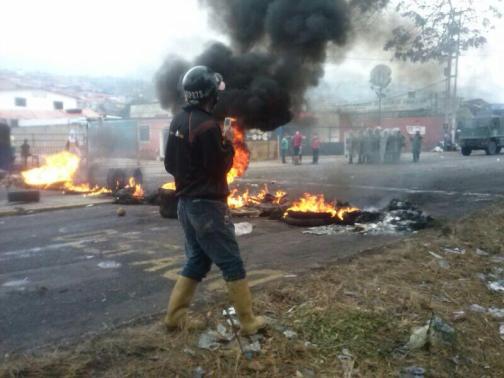 No place in Venezuela has been hit harder by the recent violence than San Cristóbal, the city of 650,000 up in the Andes where the current bout of protests started 18 days ago.

Last night, the authorities shut down internet service to the whole city, which explains why so few YouTube videos have emerged from  San Cristóbal. The internet blackout caused serious fears about what the town’s people could be facing, so today we reached out to contacts in San Cristóbal to try to get the story.

How It Started: Protesting Sexual Assault

San Cristóbal is a college town, home to three large universities (UNET, ULA, UCAT). On February 2nd, after over a year of asking the state government for improved security measures to curb rampant crime on campus, a freshman at ULA’s Táchira campus was sexually assaulted.

This attempted rape caused a wave of local protests, with students and civil society groups taking to the streets to demand justice. The government’s response was heavy handed from the start: five students were detained following a protest and sent to a jail hundreds of miles away in Coro, stoking anger even further. Students in other universities joined the protests in solidarity, demanding the original five be released, only to be repressed in their turn.

Within 18 days, that one protest in San Cristobal had snowballed into the nationwide mess we see today.

Thousands of National Guard troops were sent out into San Cristóbal at around 12:40 last night, and at 1:00 a.m. Internet service was shut down for the whole city and its surrounding areas. Then the nightly running battles started, with unarmed kids facing off against the National Guard and their paramilitary companions both – a ludicrously uneven fight where the people claiming the right to protest get called fascists by a government using grotesquely disproportionate force to quash them.

According to our sources, San Cristóbal is settling into a grim routine. Each day, perhaps only a third of stores have been opening for business in the morning, and by noon, virtually all are closed. Around this time, members of the community (not just students, but people of all ages) gather in their  neighborhoods and start blocking roads with tires and trash. By nightfall, younger people stay to man their posts, and that’s when the trigger-happy authorities unleash their serious violence to dissolve the makeshift barricades, known as guarimbas.

Guarimbeo involves claiming the street as a legitimate space for protest, while standing up to paramilitary colectivos and the National Guard repression. The favored GNB weapon so far has been rubber buckshot, which hurts bad but is rarely lethal unless used at close range. One person I spoke to told me that rubber-pellet wounds are so common among the locals, that not having one is the exception. He might be exaggerating, but it is true that these are tireless, fearless protesters who will not be easily dissuaded. They will disperse, reconvene and do it all over again. They make Caracas students look like children at a pep rally.

After the yet another night of harsh repression, San Cristóbal woke up this morning a militarized zone. Avenida Carabobo, where most running battles between protesters and authorities have taken place, is a wasteland. Heaps of burned trash lined the avenue, rubble and debris scattered along with empty tear gas shells.

Today, despite Maduro’s threats and the GNB’s deployment, clusters of protesters were already setting up their roadblocks in the afternoon. Every so often the silence of empty streets was broken by the roar of a fighter jet, and peppered by banging pots and pans.

Several eyewitnesses report large concentrations of recently flown-in soldiers on the outskirts of the city, waiting until dusk to break up the roadblocks, under the cover of night and with no media to document. The Minister of Interior took care to properly warn local journalists about covering tonight’s protest.

The city remains at a tense standstill as another night falls in what is becoming the epicenter of this battle.

83 thoughts on “Dark Days in San Cristóbal, Where It All Started”