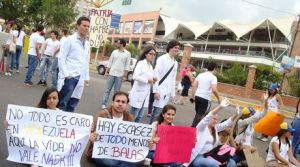 A few people have been asking Caracas Chronicles to say what they think of the current wave of protests. CC does not have an “editorial” opinion, but for what it’s worth, here are five points I would like to make … from my own personal perspective.

Alright, blast me away in the Comments section, but this is what I honestly think.

72 thoughts on “#LaSalida is not a strategy”