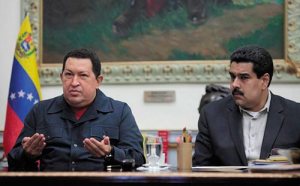 The likely picture on the PSUV ballot in the upcoming election

Sure sounds like it. He has designated December 8th, the day of the upcoming local election in Venezuela, as a “Day of Loyalty and Love for Chávez and the Fatherland.”

I kid you not.

The stated rationale behind this bizarre move is that December 8th, 2012, was the day of Hugo Chávez’s last speech, the one in which he anointed Maduro as his heir. To celebrate his not-quite-immaculate conception as leader, he is calling for people to renew their vows for the Revolution.

In his subtle-as-a-rhino-in-a-crystal-shop style, Maduro is basically equating failure to vote for his candidates … with desecrating a corpse.

This amounts to a Hail Mary pass. Maduro has nothing to go on. The economy is a mess, and people simply don’t like him much. Some of his candidates are a joke. So when all else fails … bring out the corpse!

It’s so crazy, so blatantly desperate, it just might work.

41 thoughts on “Is Maduro really that desperate?”