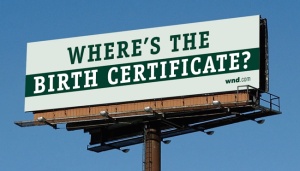 A: somewhere in Cúcuta!

The Venezuelan birther movement started out on the fringes of political discussion. It was a subject few people dared to touch, and when they did, it was a hush-hush thing. “Chico, ¿tú crees que de verdad Maduro es colombiano?”

After a while, the story of Nicolás Maduro’s curiously missing birth records grew some legs. All of the sudden, Henrique Capriles was a birther, and so are most of the opposition members of the National Assembly. The story just won’t go away. It is now part of the opposition mainstream’s political strategy.

So … what gives? Has Venezuela’s opposition finally gone off the deep end?

Now, before you think I, too, have gone birther, I have to fess up: I am on the fence on this issue, waiting for it to play out. I also think it’s important to draw some distinctions between our birther movement and Barack Obama’s.

Part of the reason why we instinctively roll of our eyes re. the birther argument is through association. After all, the US birther movement only succeeded in making fools of themselves, keeping the country distracted for a good year or so. But the Venezuelan birther case is fundamentally different than the American one.

For one, the case against Nicolás Maduro is stronger than the case against Obama ever was. Obama at least had a birth certificate in hand, although that wasn’t enough for US birthers. Moreover, there had been that birth announcement in the Honolulu newspaper which US birthers, in their irreverent nuttiness, claimed had been the product of some sort of conspiracy.

With Maduro, we have none of this. Maduro has never shown his birth certificate, nor any other proof that he was born where he claims to have been born. In fact, it’s not even clear where that place would be, since some people in his inner circle say he was born in one place, and other people say he was born in another one.

As for the legal issues, Maduro is on shaky ground there too. If Maduro had been born in Colombia to a Colombian mother – his mother was Colombian, this apparently is not in dispute – and a Venezuelan father, he would have dual Colombian and Venezuelan citizenship according to the Colombian Constitution. This would immediately disqualify him from office, as the Venezuelan Constitution explicitly bars anyone holding dual citizenship from the Presidency.

Putting all that aside, the politics of this thing gets tricky quickly for Maduro. Since Venezuelans don’t really know him well enough yet, and given how the more we see of him, the less we like him, the opposition wants to bank on driving a wedge between “him” and “us.” Birtherism also takes away the whole “I defend the fatherland” spiel. Finally, there is the military component – openly questioning the President’s nationality and legitimacy in this way is bound to stir up the adventurous streak inside every Venezuelan military man.

Deep down, though, the main difference between US birtherism and its Venezuelan version is in the institutional reality it portrays.

In the US, birtherism was seen as nutty because, well, we simply could not believe US institutions would be hoaxed in that fashion.

In Venezuela, however, we can believe it. Had Maduro cheated his way into Miraflores with the complicity of the nation’s courts, armed forces, and electoral body, it would be completely in character with the Bolivarian revolution.

Ultimately, I think that is why the birther story just won’t go away. The articles in the Constitution that talk about the requirements to be President are probably the last few yet to be violated by chavismo. It would simply be fitting if birthers were indeed correct.

144 thoughts on “Adventures in birtherism”