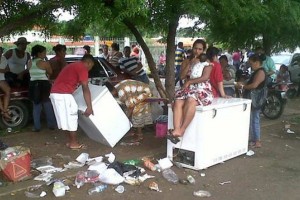 In the end, there was no final battle between Sabaneta Prison pran-in-chief “El Mocho Edwin” and State forces. Instead, all the remaining inmates were moved out over the weekend.

“El Mocho” backed down on his earlier promise to stay inside Sabaneta no matter what. He was transferred in an armored vehicle to a military aircraft, which took him and other 13 inmates to Tocorón Prison (in Aragua). The entire operation was done at Edwin’s request.

What about the rest of regular inmates? They were put in government buses and spread around prisons all over the country. But they weren’t the only people living in Sabaneta: lots of inmates’ relatives lived there for almost six months, including between 200 and 300 children (according to an unnamed source of the Prisons Ministry).

For those waiting on the outside, their main priority is trying to figure out where their relatives are by looking at the lists published by the authorities. But not all inmates were included, leaving their close ones worried sick. The whereabouts of at least 60 prisoners remains unknown.

To make it up to them, they were allowed instead to take their loved ones’ personal belongings back with them, from AC units and electrical appliances to pets. Zulia State Governor Francisco Arias Cárdenas has also pledged financial aid so they can travel to other prisons.

Meanwhile, Prisons Minister Iris Varela sees last week’s events in Sabaneta as nothing short of a “victory”. For the government, this was no battle, just a “pacification”. And who’s taking full electoral advantage of all this? None other than Chavismo’s candidate for Mayor of Maracaibo Miguel Ángel Pérez Pirela.

Sabaneta Prison may be empty for now, but Prannation goes from strength to strength.

UPDATE: To make things even more bizarre, Sabaneta Prison had its own version of a zoo. Between the animals found inside there were two ocelots, a small caiman (babilla), three macaws, a raccoon, a pig and lots of dogs. Some of those animals belonged to the personal collection of former pran-in-chief Edwin Soto.

6 thoughts on “The Battle of Sabaneta Prison Ends (Updated)”