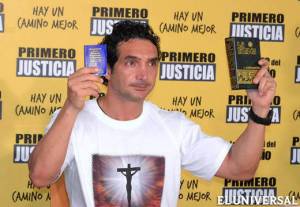 Looking for all the help he can get

Primero Justicia congressman Richard Mardo was stripped of his parliamentary immunity yesterday. In a 97-68 vote (that’s 59-41 in percentage terms, in case you’re wondering) the chavista majority in the National Assembly (read: Diosdado Cabello and his minions) pretty much took away his popular mandate, and in the process used Article 187 of the Constitution as toilet paper.

What does Article 187 say? Many things, but in number 20, it reads “The temporary separation of an assembly member can only be agreed upon with the favorable vote of a two-thirds majority of the assembly members present.”

It seems clear to anyone that stripping someone of their parliamentary immunity, a necessary condition for doing their job as legislators, is an extreme measure that can and should only be used when the crime being alleged is serious, and the evidence is solid. In the case of Mardo – who is being accused of a variety of financial crimes using allegedly false evidence, never mind the fact that legislators do not administer public money – there is ample doubt about the seriousness of the allegations.

These are all formalities, though.

In taking Mardo out of the picture, what chavistas are doing is trying to intimidate the rest of the National Assembly members into submission. The goal here is to – somehow – reach a two thirds majority by picking and choosing a couple of deputies they want to knock off and leaving in their place substitute deputies who are vulnerable to a good red bribe. The other goal is that Mardo is a front-runner for the mayor’s position in Maracay, a symbolic city for chavismo, home to important military garrisons. With his immunity stripped, is all but certain he will be barred from running.

Regardless, this looms as an expensive mistake for chavismo. It has united the opposition when cracks were starting to appear. It has also stirred its leader – Henrique Capriles has called for street protests this Saturday, the first time he has done so since the April 14th election.

There was no need for chavismo to go after Mardo. The opposition will not let itself be intimidated, and by doing it in a manner so blatantly at odds with the Constitution, they are acting like the dicatorial bullies the opposition says they are – un poco’e enchufaos.

They already had all the power to do anything they wanted, so they didn’t need to sacrifice Mardo. Instead of instilling fear in opposition leaders, by running over Mardo they may have woken them up from their stupor.

33 thoughts on “The Mardo mistake”