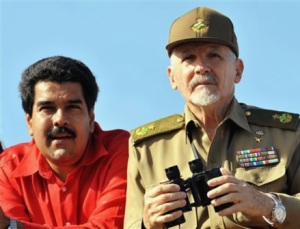 Man in charge, with Maduro to his right

My take on the big, fat question mark we may be electing tomorrow – over at Transitions, by Foreign Policy. An excerpt:

One of the failures in this campaign is that we have yet to learn much about Maduro’s life prior to politics. Earlier this week, a document presuming to be Maduro’s work evaluation from his days on the subway circulated extensively on the Internet. In it, Maduro comes across as having spent relatively little time on the job and plenty of time working in the unions and taking sick leave. In an interesting side note, the document says Maduro has not graduated from high school; the Maduro campaign has yet to comment on the document’s veracity.

Another interesting aspect is the yet-to-be-refuted claim that Maduro spent considerable time in the 80s living in Cuba. The nature of his alleged stay there has not been explained, but some opposition activists have little doubt that it meant he was part of an  part of an indoctrination program run by the Cuban Communist Party, under the guidance of hardline General Ramiro Valdés. It is widely believed that Chávez picked Maduro as his heir because he is trusted by the Castros. So far Maduro has done little to counter that belief. The broadcast of the Cuban National Anthem during an official act on TV a few days ago, simultaneously broadcast over all TV and radio stations in the country, raised eyebrows. It is however, not clear if Maduro actually sang it as some in the opposition claim.

9 thoughts on “Who is Maduro?”