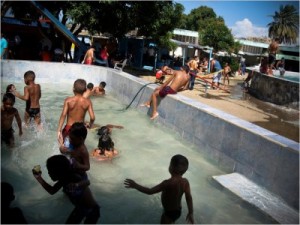 San Antonio Prison: Fun for the kids during the day and also for the grown-ups at night.

Looks like the El Rodeo I’s month-old nightclub won’t the only one up and running in the Venezuelan prison system.

According to El Nacional’s crime reporter Thabata Molina, this Good Thrusday will be the brand new opening of a night-club in San Antonio Prison (Margarita Island).

For those looking to party but not cozy with the idea of doing it inside a prison, there’s a catch: admission will be free.

San Antonio Prison was already known as a pretty fun place for the whole family, thanks to this famous NYT’s article from 2011. Perhaps, this is just the re-opening after doing some remodeling.

What better way to dodge “Ley Seca” (which will be in force that same day) than to party it up with a bunch of outlaws?