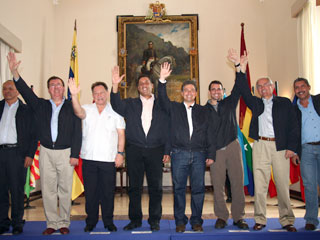 Today, everyone has a theory about what happened yesterday: people going on vacation, abstention, voters feeling sorry for Chávez, populism.

But while there may be some truth in all of this, I think the real story of yesterday’s results varies from state to state. It has to do with the local candidates.

There may be macro trends at play, but one cannot ignore the specifics of each race when trying to explain the results.

Let’s start of with the opposition’s wins. In Miranda, Lara, and Amazonas, we had three popular incumbent governors who ran solid campaigns. Chávez beat Capriles in all three states two months ago, but left-of-center governors who have built effective political machineries managed to turn back the red tide.

Then there are the losses…

In Zulia, chavismo ran a former governor who was also a Presidential candidate against Chávez. Arias Cárdenas is viewed by many people as a moderate – a sell-out, true, but a moderate as well. He has been doling out cash and goodies for months, via Corpozulia. And let’s face it: Pablo Pérez and Manuel Rosales have overstayed their welcome. Theirs is old-style politics, as we have been saying for years now. They have also neglected the political machine outside of Maracaibo, and you can’t win Zulia by focusing on Maracaibo only. The writing was on the wall this past October, when Chávez beat Capriles handily in what was supposed to be a UNT (and opposition) stronghold.

Carabobo is another story of fatigue. The Salas Clan has ruled the state for 20 of the last 24 years, so it seemed a bit rich for us to expect voters to elect them once again, particularly after Chávez beat Capriles handily there in October. The writing was on that wall as well.

Fatigue also played a role in Nueva Esparta. Governor Morel Rodríguez is a fourteen-year incumbent. The opposition voters decided they would rather go to the beach than go out and support him once again.

The story in Táchira is different, and Táchira was the one real surprise yesterday. Pérez Vivas is a one-term governor, so fatigue was not a factor, and Capriles walloped Chávez here two months ago.

However, Vielma Mora ran almost to the right of him. He is the rarest of breeds: a moderate, pro-business, conservative chavista. The soft-spoken former tax collector was the perfect candidate for what is arguably the most rabid opposition state in the nation. Notice that in his first speech, he talks about using his connection to the federal government to solve the most pressing problems tachirenses face: kidnappings, extortion, and the like. He barely speaks about Chávez.

Mérida is also another state that should have been ours. But after being one of two states that Capriles won in October, we fielded a poor candidate. Granted, he won the primary, but let’s not kid ourselves: is it really a bad thing for Merideños that Lester is not the governor elect?

Finally, Monagas was never really ours to begin with. Last year, the governor flipped and left chavismo, without wholeheartedly joining the opposition. But this is chavista country, and Chávez beat Capriles there by eighteen points in October. It was never in the cards that The Cat would be able to win there, as much as we wanted to believe it was possible.

In the end, the one macro trend I see in the results is that we need to field better candidates if we expect to reverse the red tide gripping our nation. Too many of our candidates are old establishment types. And barring poor Soraya Hernández in Monagas, we did not have a single female candidate.

There may come a time when we recover some of these governorships, and also win some new ones. But for now, with the people we put up there, we are simply unelectable.