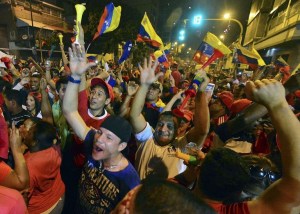 Dear 8.191.132 Venezuelans that voted for Chavez on October 7th: You have been played.

When the comandante presidente went public with his cancer in June 2011, I was out of the country. When people asked me about it, I told them that Chavez claimed he had cancer, but there was no medical report to provide details about his condition. He didn’t even say the specific part of his body where the cancer was located.

Almost 18 months later, the telenovela is going into its “final stage”. Still, not a single reliable medical report has been released.

My first reaction on October 7th when Quico confirmed the final result was that the majority of voters took a leap of faith. They believed Hugo’s claims that the cancer was defeated, and he was healthy, ready, and willing.

Devotion can guide us, but sometimes it can blind us.

Sooner or later, we knew the truth would appear. Last night, it did, after weeks of rumours. After a year and a half of uncertainty being the new normal, Chavistas now face the sad fact: the cancer never went away. They can’t stop what’s coming, period.

It’s a tad unfair to generalize, though. Maybe some knew this would happen, yet they put their interests or expectations first. Some simply believed him without any doubt.

Perhaps, it was Chavez who believed his own hype. He survived a coup, a strike and a recall election. He weathered several economic crises and survived a huge amount of problems unscathed. With his charisma and the petro-checkbook, helped by the Bolivarian Republic’s resources and an electoral authority willing to look away, he pulled out what now looks to be his swansong.

Now, hanging once again to the small chance of a miracle, Chavez has admitted that life has to go on without him. As in a line from “No Country for Old Men”: “…it ain’t all waiting on you. That’s vanity.”

He lied to us over and over again to keep his myth and his project alive.

Compare this to what Colombia’s president Juan Manuel Santos did when he announced having first stages of prostate cancer. He was open with his citizens and kept them well informed. The only thing missing was putting a picture of his surgery scar on Instagram.

All this time, Chávez refused to inform us about his condition, playing the privacy card and, at one point, berating a reporter, asking her “do you want me to show you my tumor?” Sadly for him, he isn’t just anyone. He is the head of state and government, commander-in-chief or the military and CEO of the public administration. But wait, he’s also is the head of the judiciary, the treasury and his political movement.

I didn’t start using the term “Chavernment” for nothing. He’s now involved in every aspect of Venezuelan life. He even wants to save the planet and humanity as a whole.

Other nations are now dependent of him for their stability: Cuba, Bolivia, and Nicaragua key among them. Brazil and Argentina need him to maintain their roles in South America, Colombia somehow needs him for the chance of peace. Iran needs him as their ally in the region. Even China and Russia need him for two reasons: Geopolitics and business.

And he fooled them all.

The story is not over, but now we’re heading into a political transition and with it, the possibility of a new presidential election. Chavez thinks Nicolas Maduro is the person that could continue his legacy. In another demostration of what democracia participativa y protagonica really is, he named his succesor in the old style of the PRI, the Mexican political party.

He can still win alright, but let’s get real: Maduro is not Hugo Chavez. Not. Even. Close. He’s not a leader. He’s a henchman. All these years, he has done what he has been told.

For many Venezuelans and specially Chavistas, he’s mostly a blank page. JC is right: the time has come to define who the real Nicolas Maduro is. It’s fair game now. No excuses.

Next Sunday’s election now gains more relevance than ever before. It will be the first snapshot of the post-Chavez era. It’s a new test for the MUD as well. Can they fight the temptation of spliting away and stay the course?

I agree with Juan that going again with Henrique Capriles Radonski would be a logical alternative. Even if he didn’t win in October, he’s has proved since last year to be a formidable contender. But of course he can’t just do the Hay un camino campaign all over again. Mistakes have to be corrected and gaps have to be filled.

However, he must win big in Miranda next week. If he loses or barely wins, he’s toast.

When I was watching the cadena and posting the news on the blog, I had to contain myself. I was angry about the fact that we have reached this point. We’ve been through 18 months of this. The fact is the majority of Venezuelans went along without asking questions.

As someone who has lost two family members to cancer this year, it bothers me that something that should have been treated very seriously has ended up being a soap opera.

The most frustrating part is that, as anyone who has ever watched a telenovela knows, reaching the climax doesn’t mean the end is close.

8 thoughts on “The telenovela reaches its climax”