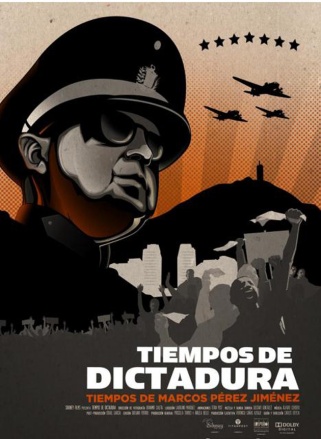 Here’s another thing you almost never see: a Venezuelan documentary in the local cinema.

It’s rare to find them in theaters for a reason, you’d have to be mad to pay money to see the average Venezuelan documentary.

But now we have a breakthrough Venezuelan doc for our times.

“Tiempos de Dictadura” (Era of Dictatorship) tries to condense the last decade of military rule in the country (1948-1958), not only in the historical and political, but also offers a glimpse of how life in Venezuela was back then.

Director Carlos Oteyza, a specialist in historical docs (JC wrote recently about one of his recent projects), has pulled off a feat in combining archive material that was unseen by many (I finally know how the voice of Rómulo Gallegos sounded like!) with a series of interviews of some of the people that lived during that period. Here’s the trailer:

The production values are top notch – amazing for a film made without any kind of State money. Narration by humorist Laureano Marquez is sober for the most part but it’s not dull. Most of the testimonies comes from political dissidents of the era (like Teodoro Petkoff or Pompeyo Marquez). Special mention for publisher and former political prisoner José Agustín Catalá (who passed away late last year). This was his last public interview.

But there’s also presence of people of other walks of life (like singer Mario Suarez and dancer Yolanda Moreno) and even a former member of the Pérez Jiménez regime: Former Army Major Víctor Maldonado. For some aspects where there was no archive material available, the film used stylish animations to fill the gaps. The soundtrack accurately reflected the times: From Billo’s Caracas Boys to Alfredo Sadel.

Sadly, some points were left unexplored. The doc is too Caracas-centric and with some minor exceptions, no other parts of the country were mentioned. Other elements could have been explored further, such as the origin of the Perez Jimenez’s motto: El Nuevo Ideal Nacional (The New National Ideal) and the attempt to force patriotism into society through military-styled actions.

Overall, the film is easy to understand even if you don’t have any previous knowledge of the subject. In the end, Tiempos de Dictadura is a great documentary that helps not only in presenting history, but could help to engage viewers into curiosity to learn more about that period and what came after. If you have the chance to see it, do so. I recommend it.

The film is already a hit in theaters after a very successful opening weekend.