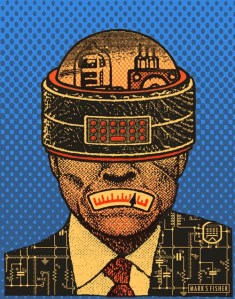 We’re on the road from La Cañada to La Concepción, south of Maracaibo, going from one Pablo Pérez campaign event to the next, and Machine Man is feeling confident. He’s sure the polls have Sunday’s race badly, badly wrong. He wonders out loud whether the pollsters who have HCR far ahead of his guy are just incompetent or actively corrupt.

“We’re going to win,” he declares, with an air of someone who’s worked through all the angles, covered all his bases, and speaks out of mathematical certainty.

Then he pulls out his iPad and starts to show me why.

As he speaks, he’s flipping through a thicket of data downloaded onto spreadsheets on his tablet.

“See, we have specific numerical targets for every municipality, every parish, every voting center and every voting table in the state. We have mobilizers down to the block level. Right now I can tell you there are 12 tables, tables, in Zulia where we might lose. That’s out of over 1,000.”

“And that’s just the mobilized UNT vote,” he hastens to add, “that doesn’t count the votes our allies are going to bring out in Tachira, in Margarita, Monagas, the llanos, Southern Valencia. And it doesn’t count spontaneous votes, the ones who turn out without anyone having to ferry them to a polling station.”

Machine Man looks up from the screen and says, “all in, we’ll be well over a million votes. Easy.”

Then he leans back and repeats, now mantra-like.