“I’m glad you’re here,” says Carmen. “I don’t know if you know this, but a few weeks ago, the guy who delivers the school lunches witnessed four people getting gunned down at seven in the morning – right here, just as the kids were coming to class. Now he doesn’t want to come anymore. He’s afraid he’s next.”

Carmen, one of the teachers at the school, matter-of-factly recites these grievances to the authorities accompanying me, while at the same time giving us a slice of birthday cake for another teacher. Life and death, it’s all in a day’s work here, she says.

I’m visiting the school with the people from the Sucre city hall, part of the greater Caracas municipal government. Sucre is in charge of Escuela Oropeza, along with fifty other schools in highly vulnerable areas.

This is my first time in Petare’s hills. You drive up through an impossibly-sloped hill, surrounded by brick houses, garbage, motorcycles, and people – people everywhere. The higher you go, the narrower the street gets. The feeling of claustrophobia and fear is hard to shake, even more so when we realize … we are lost.

My friends from the Sucre municipality wanted to take me to another school, but in the cerro’s winding streets, we lose our way. No problem – a National Guard informs us that Escuela Oropeza is right up the hill, and Lucio, Sucre’s Education Secretary, tells me we should go there instead. “Es una de las nuestras.”

Escuela Oropeza treats at-risk children from the entire barrio. Kids with hyper-activity, Asperger’s, ADD, and various learning disabilities find a sanctuary from the chaos of the shantytown in the school’s tidy, narrow classrooms.

The teachers at the school are modern Venezuelan heroes – it’s simple as that. Faced with impossible circumstances and few resources, they provide a caring and safe environment for their kids, to the best of their abilities.

I ask them where they live. One of them lives in Guatire, east of Caracas, an hour or two commute each way. Another lives in the 23 de Enero, in the other side of town. The one with the shortest – but possibly most hazardous -commute lives fifty meters below, in the barrio. She takes the stairs to come to work every day.

I ask Yosemi, the sixth-grade teacher, if her kids are on Ritalin. She looks at me as if I was from another planet. The school doesn’t have running water. They haven’t had an onsite psychologist in months. She tells me the more severe cases have been evaluated, but they never get the results back. You can’t treat what is not diagnosed, she says.

She does what she can to help them, but the problems are overwhelming: physical and sexual abuse, self-esteem issues, and abandonment are par for the course. A twelve-year old recently knocked on their door to enroll on his own initiative. His junkie mom had never bothered enrolling him, he was illiterate and had heard this was a school for kids like him.

I poke my head into the fifth-grade classroom. I ask the kids to guess where I’m from. When they hear I’m from Maracaibo – Venezuela’s second-largest city – I ask them if they know what state it’s in.

None of them know. I am later told most of them are barely learning to read and write. 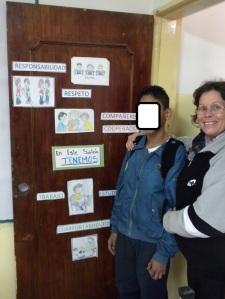 Susana and a student (face blocked because of LOPNA)

I ask Susana, the fourth-grade teacher, about textbooks. She says the mayor’s office gave them textbooks last year, but this year they gave them half of the amount. The Mayor’s Education Secretary, on tour with me, makes a note, and talks about how the national government has cut the opposition municipality’s budget. He promises to do what he can.

The school teaches basic job skills such as electricity, woodwork, sewing, and cooking. I ask Suleima, the cooking teacher, about some of her success stories. She tells me, with obvious pride, about a couple of her students who recently got stable jobs. One works at a bakery, the other at Domino’s Pizza.

I ask her for a picture, and she says no. First, she says, I need to put on my uniform. 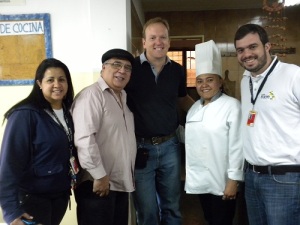 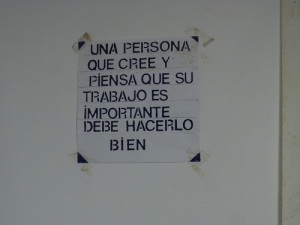 All over the school, you see signs about basic values: companionship; respect; responsibility; work ethic. One sign reminds kids that your job is only important if you do it well. In the kitchen, another reminds them that the table is where a person’s true culture reveals itself, and that they should treat the dinner table with respect.

Public schools are voting centers in Venezuela. When there is an election, the military takes over the school for a few days before, and a few days after.

Maydelin, another of the teachers, tells me that after the last election, they came to work to find that somebody had stolen the entire computer lab. They have yet to raise the money to replace it.

I have a hard time hearing her. Directly above us, eight recently-purchased Sukhoi war planes are practicing for a military parade.

We wonder, in silence, how much the parade is going to cost.

102 thoughts on “Sukhois over Petare”