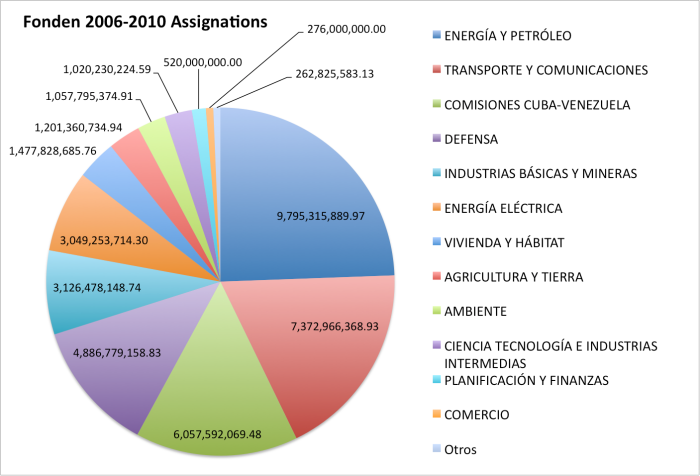 So now that we have those Fonden disclosure documents, it’s time to jump into the minutiae. Of course, we only have detailed 5-year disclosures for $40 billion out of the $69 billion Fonden has apparently assigned, but beggars can’t be choosers, so…

The first thing that jumps out at you is that by far the largest share of Fonden assignations are…to the Energy and Oil Ministry! Almost $16 billion out of the $40 went right back to the place where it came from: PDVSA.

Granted, that figure is inflated, though, by the Comisiones Mixtas Cuba-Venezuela – which, apparently, is bureaucratese for Sending Truckloads of Cash to Cuba. Turns out those commissions are run out of the Energy Ministry, and they’ve gotten over $6 billion assigned in the last five years!

Even after you leave out the cuban tajada, the Energy and Oil Ministry is still the largest recipient of Fonden funds. It’s hard to know what to make of that: it seems PDVSA could just as well spent those dollars directly out of its cash flow, without the need for the money to take a roundtrip through Fonden. There’s surely some reason why this happens, but hell if I know what it is.

The second biggest money-getter is Transport and Communications: railway construction, light rail and metro projects, bus buying, road and highway construction, that sort of thing. On the one hand, insofar as a mechanism like Fonden is justifiable (which isn’t very far at all), it’s this kind of project that can justify it. On the other hand, with “oversight” for each project limited to a single line on a spreadsheet, and $7.3 billion dollars at stake, you can be sure many, many hands have been greased out of this pot.

If you counted Cuba as a ministry, it would come in 3rd, with those Mixed Commissions getting over $6 bn. That’s a crazy scandal right there – Cuba’s gotten four times as much out of Fonden as housebuilding! – but not exactly a surprise.

The next two ministries are, to me, the real crux of the matter: Defense and Basic Industries (a.k.a. Guayana state-owned boondoggles.) Nearly $8 billion have been utterly wasted on these two assignations: buying advanced weapons systems we’ll never use, and pouring money into Guayanese money-pits the state has no business running in the first place. That’s $8 bn. of the Petrostate at its most mindlessly non-productive – pouring impossible sums into projects that create no value, no positive externalities, no development results…plain old waste.

The $3 bn. Alí Rodríguez got in a hurry last year to deal with the electric crisis looks comparatively easier to defend: that’s certainly a core state activity, though of course if they’d planned ahead a little they probably could’ve done a lot more with a lot less.

It’s further down the list, though, that you start to appreciate why the billions wasted on Cuba, on weapons and on doomed Guayana projects are so criminal: housing gets just $1.4 billion, and health gets lumped in with the rump “other” category. Just a drip. Education? Not there at all – understandable, perhaps, as Fonden spends only US dollars, but still.

For a fund that bills itself as National Development-centered, core social spending is a vanishingly small proportion of what Fonden does. Judging from Fonden’s priorities, subsidizing Caribbean dictatorships, buying Russian fighter jets and propping up loss-making steelmakers seems to be chavismo’s idea of National Development.

Sorry to get monotemático about it but, tomorrow: some choice line-items from the 140 project list!

40 thoughts on “Where does Fonden money go?”